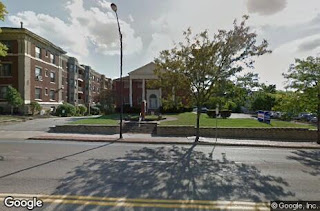 The parish school was established for the 1929-1930 school year.  Obviously without the school building finished yet, some accommodation had to be made.  The Knights of Columbus building at 272 West Market Street was put to use.  The hall of the building which is now the Teamsters Union Hall, was divided into makeshift classrooms for 220 students.  Holy Humility of Mary Sister were the first teachers of the parish.

Then on November 1st, 1929, the new school building was ready to welcome its first students.  Not that the building was yet finished.  It would not be until Thanksgiving that the it would be dedicated and the first Mass not celebrated until four weeks after the school had taken up residence.

It is interesting to note that over the doors of the new building are the words, “Pro Deo” and “Pro Patria.”  This is translated as, “For God” and “For Country.”  Anti-Catholic sentiment was strong in the United States and many questioned if a Catholic could be a true and patriotic citizen while maintaining allegiance to the Pope in Rome.  Of course, patriotism to legitimate authority is a strong Catholic tenant and so these words in Latin were placed on this new building to show that not only were Sebastianites Catholic, they were also true citizens of the United States. 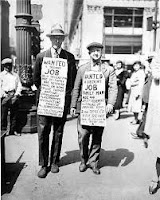 That Thanksgiving was said to be one of the nicest weather wise in years.  In the middle of once abandoned farm land stood a brand new church, school (main floor), office, convent (for twelve nuns on the top floor) and hall (in the basement) combination building of a modified Spanish architecture, decorated with red, white and blue swags, ready to begin servicing the people of the parish of St. Sebastian.  It was a building “of the modern school of stone and light brick with Romanesque detail.”

The happy day did not come without its downside.  Such a monumental building came with a huge price for such a young parish and it was straddled with a huge debt just as the country plunged into what is now recognized as one of the worst economic downturns in American history. 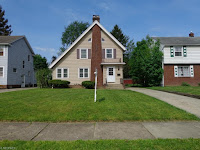 Though the combination building served many purposes, it did not serve as a rectory and a place for the priests to live was needed.  A house was rented at 454 Roslyn and would serve as the rectory until 1937.
Posted by Fr. V at 6:15:00 AM

First, I want to tell you how much I am enjoying your series on your parish and others in the area and how they got started and built up. Between this and the Monday excruciatingly true stories, you really should put out a book! It is fascinating. I know something about my parish (St. Bernard), but it is so interesting to know about yours and others and how we helped each other grow, like brothers and sisters in a family.

Secondly, I want to pass on a story that concerns your parish. I work next door, at the Perkins Middle School building as a secretary in the adult nursing school. We share the building with another Akron Public Schools program for children who have problems in traditional class settings.

Friday, one of their teachers asked to use our copier, and as I waited for her copies to finish, she expressed her concern about the poor victims of Hurricane Harvey, wishing she could do something to help. I told her I felt the same, and planned to contribute to a special collection the Diocese is planning for next weekend. She said her church did not have anything like that planned, and asked which church I attend. I told her I am a Catholic who belongs to St. Bernard.

She immediately lit up. She told me she is a Baptist, but that she loves Catholics with all her heart. She explained that her daughter, who is a single mother with a special needs child, lost her job and had nothing to eat, and was barely holding onto her home. The teacher and her husband were not in a position to help since he had also lost his job. So her daughter appealed to her church, which told her to apply for government assistance.

Knowing it takes a few weeks for government assistance to kick in, in desperation, her mother appealed to St. Sebastian, seeing the parish is our next door neighbor to the school she works at.

Within 4 hours, parishioners were at her daughter's house with bags of groceries and vouchers for Acme so she could buy meat and milk.

With tears of gratitude in her eyes, the teacher told me she tells everyone she knows that Catholics truly live the Gospel, and that we do not simply give lip service to the teaching of loving our neighbor as ourselves.

I know we do what we do for the glory of God and to serve Him, and that it doesn't matter if others notice. But I thought you would like to know that the good works you and your parishioners is very much appreciated and that it makes a difference. I do not know who I am quoting, but I agree with the saying, "We do not help others because they are Catholic. We help others because WE are Catholic!"

God bless you and all your parishioners - Susan, ofs

Susan, thank you for that story! Beautiful!