Many of you are experiencing priests collecting boxes.  It is the time of year when those who are completing their assignments are getting ready to move where the Spirit (and their bishop) calls.  For these more seasoned men, the news of where they are going is largely handled over the phone.

But there is another group of men anticipation something similar.  They are our soon-to-be newly ordained.  The announcement of where they will be spending the next four years of their lives is not handled so casually.  Rather, it is more like a game show.  Those to-be-ordained and their future pastors are invited to the Cathedral Rectory where Bishop Thomas would make the big reveal. 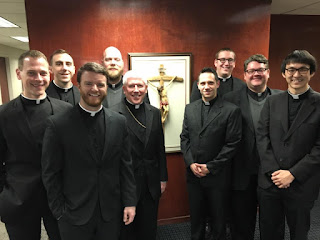 I was really not all that concerned.  It is a great group of men and I would consider myself lucky to have any of them.  But for some reason, I woke up nervous that morning.  I would meet the guy with whom I would be working and living for next four years.  So I guess that is worth being nervous over. 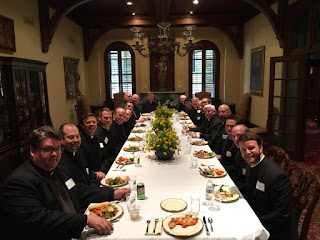 I rode up to Cleveland with other Akron pastors who would be receiving a newly ordained.  (That made the trip so much easier.)  We were ushered into the Bishop’s parlor, a large well appointed room.  We sat on wingback chairs in front of the large marble fireplace over which hung a large painting of the Blessed Virgin Mary who presided over the room.  The rector of the seminary spoke to us first and told us his impressions of the men we would soon be meeting as we distractedly sipped at our coffee.

Then, about a half hour into the meeting, the Bishop lead the soon-to-be-ordained-preists in the room and sat them in alphabetical order across from us.  Fortunately the Bishop was not of a mind to prolong the torture and immediately went about the task of announcing the assignments.  Here are the results:

Notice Deacon Simone is at the end of the list.  It was agony waiting to see who would be coming to St. Sebastian.  When it was down to just Deacons Morris and Simone, I was as tense as a cat on the sting above a pool of swimming doberman pinchers.  Quickly enough, by process of elimination, it became clear that we would be blessed to have Deacon Simone at St. Sebastian!

About a month ago we had a dinner for this class at St. Sebastian.  Even though they were not supposed to know, for various (and good reasons if anybody from the diocese is reading this) they knew that one of those men would be coming here in June.  “If they were puppies,” they told me, “and we get to pick one of them . . . “  Well don’t you know Deacon Simone was at the top of the list!

The rest of the afternoon was a workshop basically detailing how best it might be for old men (me) and young men (the deacons) to live together in harmony.  Then we had to go our separate ways for they had a seminar to go to that evening.  It was like getting a new bike and being told you can’t ride it for two months. 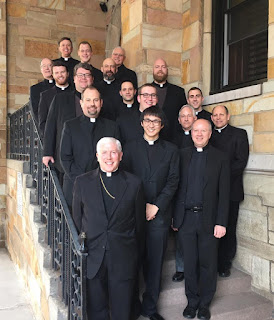 When I went through this as a young almost priest, we left the meeting and found phones to call people and tell them where we were going.  Whey Fr. Pfeiffer was coming to St. Sebastian, all of his class and phones to immediately text to their family fiends where they were going.  At this meeting, WE ALL HAD PHONES and by the time the meeting was over, parishes were already posting the results!

Please keep all of these men in your prayers.

That is my former systematic theology professor in the bottom photo -- Bishop Daniel Thomas!