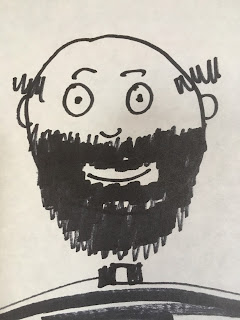 As many of you know, I let my beard go a bit feral since November.  I rather liked it and so did a certain select group of people.  You know all those comics you see about men rating other men by their beards?  I hate to say that there is a modicum of truth behind it (and not being over muscular or particularly athletic, I liked that I could at least grow a decent beard.)

Among those who definitely did not like my bristly advantaged self was my sister.  She made this opinion so sisterly clear that back in January I promised her that for Easter, I would hack it back.  It seemed so far away as to not matter then, but as Holy Week approached the anxiety of getting the hedge trimmers out started to nag at me.

Monday passed.  Tuesday passed.  Wednesday passed.  Finally on Maundy Thursday I knew it was time.  I locked myself in the bathroom, put on some depressing music, and began the topiary task of carving a smaller beard out of the cathedralesque beauty that hung off of my chin.  To me it felt a little bit like this:


But let me tell you (although she did suggest that I did not go far enough) my Sister was well pleased. 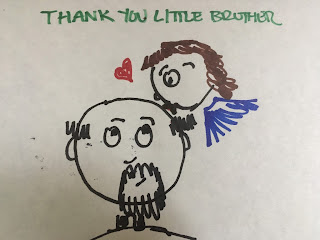 When I was a kid, if I did my chores for a month and brushed my teeth every day, one of my sisters would take me to Bodnar's Drug Store to get a toy as a reward.  (Usually a Slinky - a real metal one - not that plastic trash they sell today.)  Things really haven't changed much: 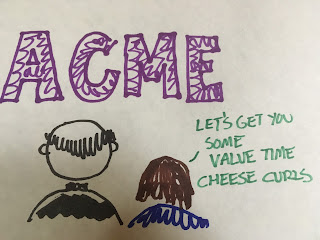 But as we approached the snack section at the ACME grocery store and searched the shelves, we could not find any Value Time Cheese Curls!  Now, we haven't had any for quite a spell at the rectory.  Marcy said that they were simply out of them (which of course made sense since they are so outstandingly delicious) and so bought me some other-not-worth-mentioning brand to hold me over.  Then I gave them up for Lent.  Now they tell me they don't carry them any more! 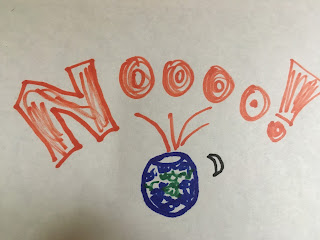 I don't think anybody really understands how much I liked this staple in my diet. 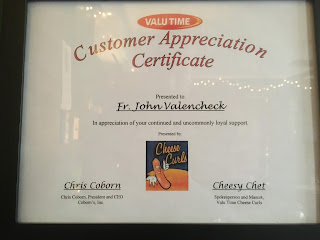 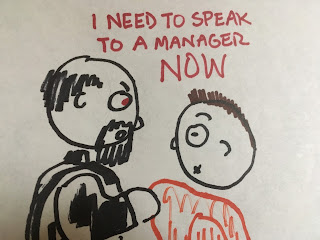 (Yes, I really did speak to the manager.)  He told me that the Value Time line was not a good seller and that they had stopped carrying EVERYTHING IN IT INCLUDING MY CHEESE CURLS!  Talk about throwing the baby, the tub, and his mother out with the bathwater. 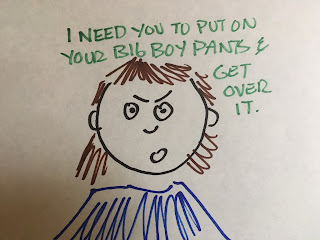 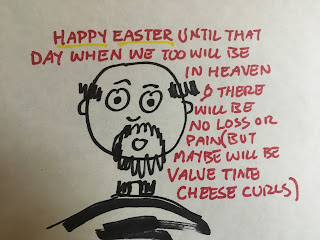 Of course, at Theology on Tap, Eric did buy some white cheddar popcorn that I couldn't even swallow before I was shoving another handful in my mouth!  When God closes a door . . .

That video was the second saddest thing I've seen in the last 7 days. The first seeing Fr. Klonowski's BEARD THAT COULD RULE THE UNIVERSE shorn clean off as if it never existed.

Value Time Cornflakes and their Bran Flakes have been staples at our house.

As a small child, I was terrified of men with beards, especially Santa. Every December, my parents would dutifully drag me to my yearly interview with the big guy. Without fail, I would have a sobbing, choking meltdown. I am certain I embarrassed my parents. My breakdown would be so complete, I could not answer them when they asked what my big hairy problem was. I would remain humiliated until we left Polsky's or O'Neil's in disgrace.

I think it was because all the men in my life (Dad, my uncles, our priests) were all neatly clean-shaven. I simply could not deal with a grown man dressed in a red velvet suit with a big voice and all that terrifying facial hair. What man did that?!

I know priests are not vain, and that surely you have too much going on to even think of it. But if it is any comfort, I think men look much younger when they are clean-shaven. Besides, we can see your smile better. So don't be sad.

Very best Easter blessings to all of you at St. Sebastian - Sue from St. Bernard

PS - Maybe you could check out Save-A-Lot for your Valu Time Cheese Curls. They might have them or a reasonable facsimile. Don't be sad.