FROM TRAGEDY TO JUBILEE

Fr. Pfeiffer and I jumped into his Bernadette Subaru and headed south to Columbus to visit the Jubilee Museum.  The Jubilee Museum in the Diocese of Columbus collects discarded Catholic items from closed or closing Catholic churches and displays them in a former Catholic school in Columbus.  (Some items were reclaimed from bars, junk stores, and other businesses that obtained sacred items when a church closed.) The founding priest is Fr. Lutz pictured below. 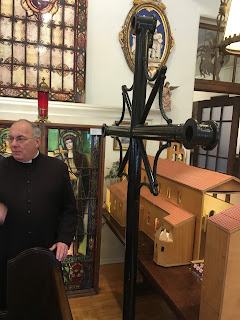 The interesting cross next to which he is standing was made of parts of the wrecking ball crane that was used to tear down a Columbus church the model of which you can see in the background.  (I will let him tell you the rest of that story when you visit the museum.)


There are many wonderful and interesting things to be found there and our gracious host gave us a most excellent tour.  Below is from the vestment collection, probably my favorite room in the museum. 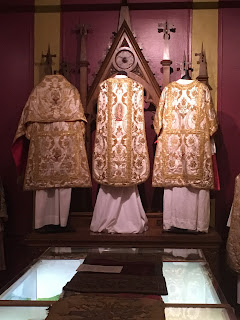 As evidence that he is not too narrow in his saving of items, below is an example of a vestment (that was quite well constructed) that looks - well - while well done would have been an excellent addition to a Lost in Space episode had a Catholic priest been on board. 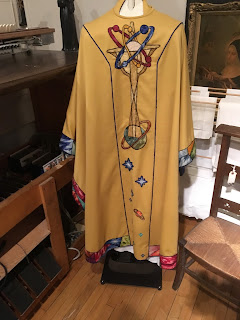 The items are varied and sometimes surprising.  Below would be a case in point.  This is a portion of a branch of a tree under which the very first Mass in Ohio was prayed.  They were apparently cut and handed out as commemorative pieces to mark the occasion.  (That isn't even the most remarkable part of the story but again I will let a docent give you the full story.) 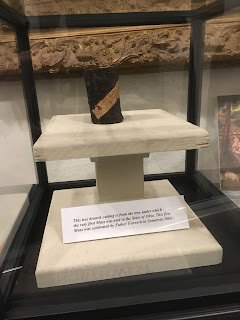 I have had some personal items that I have saved from parishes over the years - items that were destined for the dumpster of which I said, "I'l take them to the dumpster for you," and they ended up in my basement.  Finally a good home was found for them and we did a little bit of bartering.  I exchanged my items for the item pictured in the backseat of Bernadette Subaru.  It is sanctuary lamp that will be used in the new chapel at the Julie Billiart School in Akron. 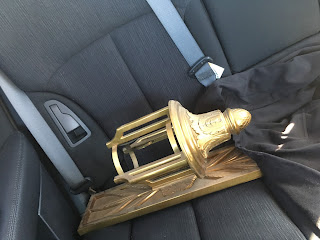 Fr. was also gracious enough to provide some materials pertaining directly pertaining to St. Sebastian Parish in Akron!  Those will be revealed on our 90th anniversary.  Thank you and God bless Father!

So here are a couple of things with which I will leave you:  The first, I have a chapel that I need to make Catholic.  The school, named the Julie Billiart School at St. Sebastian, Akron, is a Catholic school for children with learning challenges.  The chapel (shown below) will be used by the school.  It needs everything and I cannot take it out of the parish budget: candle sticks, statues, stations of the cross, alter linens, a nice sized corpus for the cross, processional candles and cross, pipe organ . . . you get the picture.  If you have anything, please consider donating it to the new school. 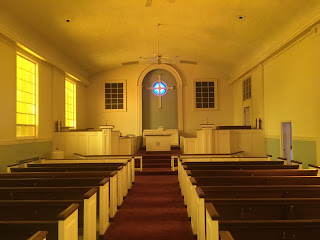 OR - if you have items that do not have a good home and they would not work in the chapel above, consider donating them to the Jubilee Museum where the will be given a good home.

What an interesting article!

First, what is a "Bernadette Subaru"? Does Father Pf's car have a name, and is she a girl? Does she have a middle name? We have two Subarus, but we have not named them.

I am a St. Bernard parishioner. When they renovated the church in the 1960s and 1970s, several items were removed. It really wasn't an awful renovation compared to other parishes. We could still recognize our church when they were done, and it was done gently. I think our church is absolutely stunning. Our pastors from that time until now have taken good care of us and have done their best with our antique church.

I was on parish council some years ago when were preparing for the 100th anniversary of our church building (the parish was started in 1861, but the present church was not consecrated until 1905.) I understand it was built to be the cathedral if a diocese was created in Akron, because at that time Akron was the fastest growing population in the country (obviously, that did not last long!)

I heard many stories from Fr. Schindler and parishioners who were there during the renovation that our beautiful statue of St. Michael brandishing a hefty sword was removed and destined for the dump. St. Michael used to hover in the main vestibule on Broadway. My father told my 4 or 5 year-old self that he was watching for people who came in late to Mass. I was very impressed by this. I imagined that St. Michael would leap from his perch and warn us not to ever let that happen again! I would certainly have listened to him!

Anyway, apparently St. Michael and other artifacts were rescued by anonymous parishioners who just couldn't bear the thought that these beautiful items, which were part of our parish history and served us well, would be treated disrespectfully and forgotten. Fr. Schindler told me that St. Michael is in somebody's basement because the parishioner in question does not trust that the statue would survive or even be wanted if it were returned to the parish.

Being on council for a few years after that, I regularly heard from parishioners who are still hurt that most of our altar rail was hauled off (a few feet of the original marble rail remain). Apparently the parish schoolchildren, at the time the sanctuary was finished, saved their pennies and nickles and paid for the rail themselves. Those schoolchildren are the parents of some of our present parishioners.

I think these people were very pleased when Fr. Reed arranged for a beautiful new marble ambo after we merged with St. Mary. It looks like it has always been there.

God bless you and all your parishioners this holy season!

I believe Bernadette Subaru is a play on words, and a clever one if you ask me. You may have heard the story of how Our Lady of Lords appeared to Bernadette... turns out that Bernadette's last name is Soubirous, the American pronunciation of which sounds an awful lot like Subaru.

Does that make sense?