If you have been reading this blog for awhile, you know I have difficulties with the unity candle.  (We do not use it at St. Sebastian.)  Among other things, as we have been discovering over these few months, we have spent so much time and care making sure that everybody is aware, informed, and is consenting to what is taking place.  To whit:

Then, for some inexplicable reason, some people feel a need to put on a piece of theater whereby, just incase somebody didn’t quite get what was going on, they take two candles, light one candle together with them, and then obliterate the light from the original candles.  (I have lots of problems with the symbolism, particularly at the Mass, with this.) 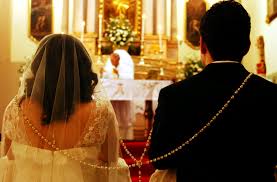 NOW, isn’t interesting that the new rite for marriage has new options for those entering into matrimony, but the unity candle is conspicuously absent?  Actually, I am so happy that they Church did not make it an official rite.  There would just be a ton of verbiage added to it.  “Now, bride and groom take the candle of their single selves, a light that has burned since their baptism, symbolizing the life of BLAH BLAH BLAH. . .

But there are some newly codified options but I doubt, unless our neighborhood changes dramatically, they will be of much use at this parish.  The first option takes the place of the exchange of rings.  It is the rite of the blessing and exchange of arras or coins.  These are used primarily with those of a heritage and practice from Spain, Latin American countries, and the Philippines. 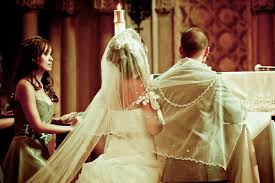 "Of course," some of my liturgist friends would say, "what does this say about taking a rose to Mary?"