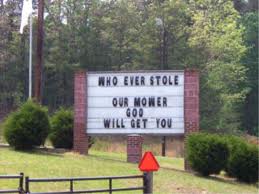 There is a local church that has one of the few marquees to which I pay attention.  There is always something there that makes me stop and think, usually because it is a challenge to my belief though we share the same moniker of Christian.  The church considers itself progressive and innovative and advertises such quips as, “Planned Parenthood helps men too!”  This is, of course absolutely true.  As long as the man has not had the life snuffed out of him in his mother’s womb by Planned Parenthood, it will then help him later in his life, if appropriate funding can be found, even to helping him snuff out the life of his own son.
And so we have the march of progress.  In fact, that is one of their latest tag lines on their marquee: “Progressive churches make things happen.”  This little dandy caught my attention and occupied quite a bit of my contemplation time.  “What exactly is that supposed to mean?”  Like so many things we are presented with, it seems like it means something but if you take the time to think about it, it really doesn’t. 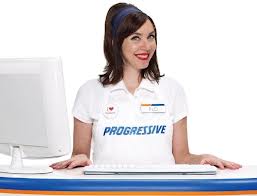 Consider firstly the word “progressive.”  What does it mean to be a church “of progress?”  After all, progress in science may allows us to have vacations on the moon, but we may not live to see it if our cancer progresses.  For progress to mean anything positive, there must be a goal to progress to.  For far too many people, progress simply means stumbling forward; doing something because we can, not because we are supposed to.  Not all moving forward is progress.  Cities, societies, even people move forward toward decay.  If you do not know who you want to be when you grow up, you might get older, but you won’t progress to anything positive.
In order for a Christian church to be progressive, there must be an ultimate goal and that goal must outline what is best both for the human person and for humanity in general physically, mentally, and spiritually.  It must be based on truth and being so, all true progress will move toward that truth.  Progress, then, is not a process of allowing humanity to go to seed as it wishes but to lift it up to an ideal; rather than broadening the path, it teaches men to walk the narrow road. 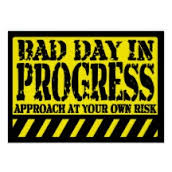 In this, then, I would argue there is not a Church as progressive as the Catholic Church in (when it is properly understood.)  It has an ideal to achieve and to which man is called; it calls each individual and collective communities to the highest standards of health, knowledge, and holiness.  When it moves men in this direction, it is truly progressive. 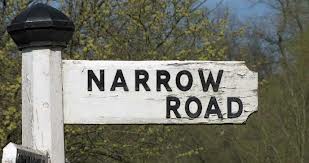 “Makes things happen,” the second part of the tag line, is a particularly value free statement.  A squirrel running past a dog in a china shop makes things happen.  That being said, if I had to guess at what the sign intended to convey I would supposed it implies that if you do not like the current state of affairs or the current idea of what progress is, then one should join them to make change happen.  (A whole other topic.)  As a whole, I like “things to happen.”  It is far superior to things not happening at all.  But there are things I would rather happen and other things I would rather not.  But in any event, if I am going to be part of a church that “makes things happen,” I hope it is truly a Church of progress and not simply a Church blindly moving forward.
Posted by Fr. V at 9:10:00 AM

I've had a problem with how the word "progressive" is used politically these days, instead of the word "liberal," which was previously used. Apparently, that latter word became stigmatized. So now "progressive" means "liberal" without having to say so.

(Like progress, “liberal" can carry either a positive or a negative connotation, depending upon the context.)

So, any political cause that is "progressive" must mean that it is good, even without examining its merits.

We are being manipulated by those who use language to achieve their ends. "Choice" would be another good example of manipulating public opinion by manipulating language.

I have a fantasy about hacking into that sign and making it say a few other things! Alas, I am not that talented.