MONDAY DIARY - ALMOST EXCRUSIATINGLY TRUE STORIES - LOOK UP THE WORD "LUDDITE: FOR ME.

I've been receiving quite a bit of peer pressure about my phone that doesn't do much more than make calls and send texts - which BTW is a big step forward for me. 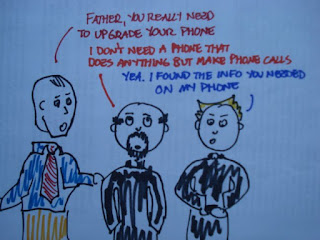 We had a funeral this past week for a lady that was almost a century old.  I think about the technological changes in the world that she must have witnessed from primitive cars to space stations.  How interesting it would be to go back in time and tell her the future of her phone.  Could she even comprehend it? 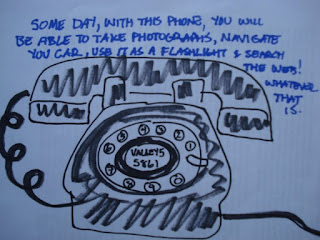 I don't think that I need a phone that can do all the fancy shmancy things that they can do today.  But I have come to realize that it is because I have been living with such a phone vicariously. 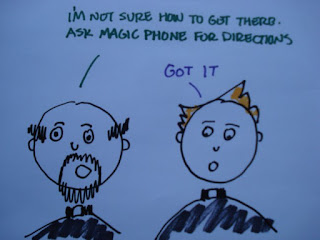 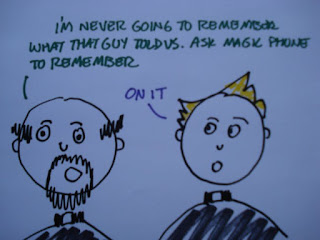 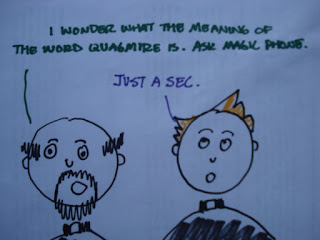 And now Father Pfeiffer is in the last month of his time here at St. Sebastian.  I don't know that my new parochial vicar will be pleased to be as kind as Fr. Pf in not only owning one FOR me, but also operating it for me. 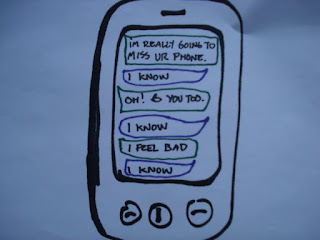 "I have been living with such a phone vicariously" ? Groan.

It sounds like it's time for you to get a new phone.

Perhaps Fr. Pfeiffer could have one of his final assignments be "magic phone " shopping & teaching Fr. V...magic phone 101.

I agree with the Anonymous after Karen. It sounds like you are headed toward getting one sooner or later. You might as well get it now while Fr. Pfeiffer can show you the ropes. Good luck!

(Plus, you experiences with it will make good fodder for future columns, ha!)

Don't do it, Father. Magic phones cost $40/month before you even get to buying minutes and data. Magic phones are no good if you don't buy data. I'm sure the new guy will have a magic phone. Gen X and Gen Y can't live without them.

The friendship between Father P & Father V is incredibly sweet. I'm glad that they have placed Father P close by so you two can still hang out! :D

@lgreen515, not so! Virgin Mobile offers some great smart phone no contract plans (even with an iphone!) starting at $35 which includes 300 minutes, and unlimited texting and web. They are a great deal -- and no contract means you aren't locked into it for 2 years at a time. Welcome to the digital world, Father :) Once you have one, you'll never look back!

And I second what "Anonymous" just before me said . . . your camaraderie with Fr. P is so great to read about.

I wonder if the new priest realizes that he is going to be part of online of an comic series. Hope he's ready!