Continuing our countdown to the New Year using John Allen’s talk at the Akron First Friday Club concerning the top Catholic stories of 2012 we hit #3 of 4: Vatileaks!  This is the story of how the Pope Benedict’s personal secretary removed documentation from the Vatican and sold it to the press.  This was an early Christmas present for the world that loves a good story.  It was full of all the right details: The mysterious Vatican, high ranking officials in the Church, an insider giving the public sneak peeks at the inner workings (and some inglorious ones at that) of this rather unique city-state, and best of all:  THE BUTLER DID IT. 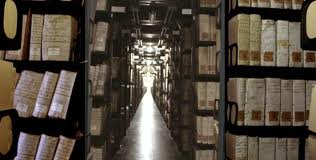 Be that as it may there were some interesting and somewhat controversial results of this incident.  The pope opened up the books of the Vatican bank in order to be more transparent to the world – to try to establish trust again in the Vatican.  What is so controversial about this you might ask?  Think of how vulnerable the Vatican is.  Rome has been sacked more times than bread in a grocery store.  We have fought “with blood” to keep this small patch of land sovereign.  Is the Vatican in any way compromised because it allowed “outsiders” to come in and examine its books?  In any event, this is completely unprecedented.  And, as John Allen made mention, when you are talking about a 2,000+ year organization that has gone through what the Catholic Church has gone through, saying that something of this nature is unprecedented is saying something.
Posted by Fr. V at 6:34:00 AM