MONDAY DIARY: BUT ULTIMATELY IT IS THE HOLY SPIRIT

People often ask the question, "How long does it take you to write a homily?"  It is more difficult to answer that question than one might imagine.  It really depends on the readings, what has been going on the world lately, what is coming up (Christmas is a difficult one - there will be people there you've never or rarely seen and you want to speak to them as well as the usuals and be inspiring to both) and a host of other factors.  Another factor is how inspired I feel.  Sometimes there are so many ideas floating around that one is virtually drowned in the them. 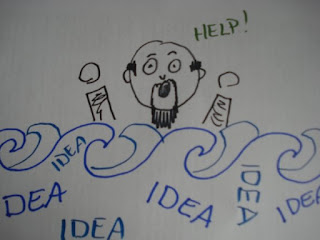 In such cases it is more of an effort to decided what you are NOT going to preach on.  Only so many messages can be given at any one homily.
And of course the converse is also true: 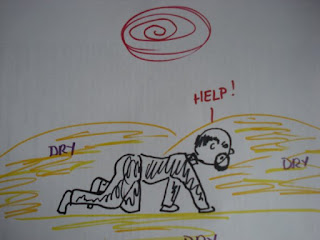 Trying to come up with an idea can be like trying to squeeze orange juice out of a baked brick covered in sand in the desert after a drought.
Though I often say that the true test of a good homily only makes itself known weeks after it has been given, I still like to see what the initial reaction is after Mass. 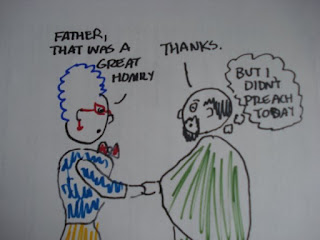 So, sometimes the ideas come fast an furious and it really does not take that much time before you know what you are preaching on and how it will all come together. 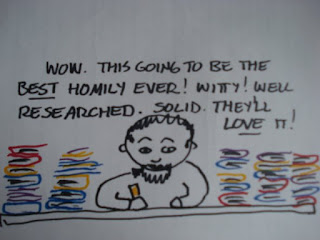 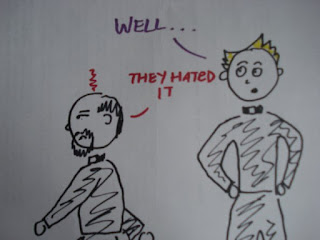 And other times it is more painful, unfruitful, and time consuming. 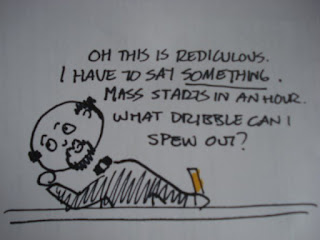 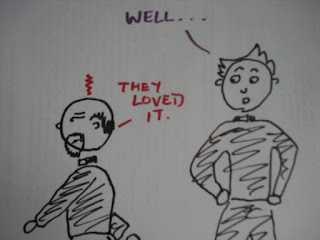 Love your cartoons father but the English teacher in me has to ask: did you mean "drivel" or did you really mean "dribble" as in the toothless baby dribbled all down his front?