The second of four topics in John Allen’s Catholic news year in review is the New Evangelization.  This new effort within the Church will be “the engine that steers the financial train” of the Church making this the most important internal priority in the Church.
Statistics are a funny thing.  It is said that 67.2% of all statistics are made up on the spot (that is a joke) and that you can make statistics mean just about anything.  But if we only look at the number of new adherents, Christianity is the fastest growing religion in the world.  Interesting, but the happy news is not great for the western Catholic world.  Catholicism continues to be the largest single religious group in the United States with Baptists coming in a distant second.  (Protestantism as a whole is larger than the Catholic Church, but they are splintered into thousands of denominations.)  However, larger than even the Baptists are those who consider themselves former Catholics.  Though 68% of those baptized Catholic as infants remain Catholic into adulthood, that leaves 32% that “leave” and we are not doing a good job of retaining or replacing them. 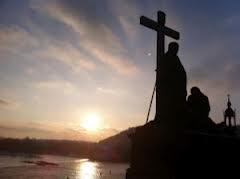 Part of the reason is we have become so terribly polite.  “I’m Okay, your Okay, let’s not talk about religion” has become the political fashion.  While it may allay fist fights, it does nothing for evangelization and the furthering of the faith.  Hand in hand with yesterday’s post, we are to stop focusing on issues that are not on the Catholic playing field and get cracking on real matters of faith and truth that enliven peoples’ hearts.  The fire of evangelization has grown cold.  It is time to wake from our slumber, shake of the cloudiness of confusing issues, and carry forth the banner in the clear light of the sun – to banish complacency and apathy – and to relight the missionary fire to warm those around us in our everyday lives.