FRIDAY POTPOURRI: THE END OF THE MYSTERIES

I think with this post all of the mysteries of the church building are now solved (although one never knows.)  You may recall last week the picture of the mysterious holy water font-looking thing that projected out of the wall a little higher than knee height around which was built a bookcase. 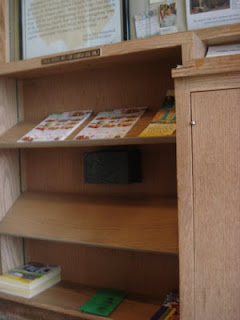 For a few years (when it was rediscovered) I had no idea what it was and then two weeks ago I stumbled across a mysterious door that seemed to solve the mystery. 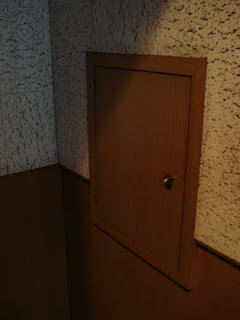 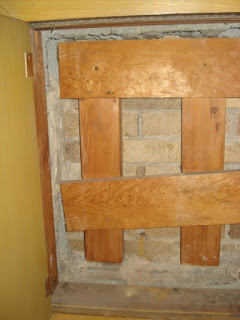 I was pretty sure I knew what it was but it was confirmed by Mr. R. Krause whose father designed all of the beautiful buildings at St. Sebastian.  He confirmed my analysis of the clues with this Email:
Father, I had considerable to do with the construction of the church. My memory is now in such a state that I do not recall much. I think that there was a holy water reservoir in the SE vestibule at which parishioners could obtain a supply of holy water. I do remember this: Father Byrider instructed me to devise a pamphlet rack for the north wall of the SE vestibule, which I did, it was built, and that is what is there now.


Respectfully
R M Kraus sr
So there you go.  Mystery solved.  Thank you Mr. Kraus.  I am a little sad that all of the mysteries of the building seem to be solved now.  Every church (and theater building) should have their quirks that make people scratch their heads and wonder.
I remember my first week at St. Sebastian.  One of my best friends came over and we started exploring nooks and crannies of the building.  Unfortunately someone had thrown out everything older than a few decades so there were no finds lurking in an attic or basement box, but we were stymied as to how to get into the bell tower.  We knew when we were standing at the inside base of it, we could see it from the stained glass windows in the choir loft, but could not figure out how to get inside (and to the top) of it.  Finally the plant manager, Aaron, showed us how.  It is a rather convoluted route and the beginning of the solving of the mysteries. 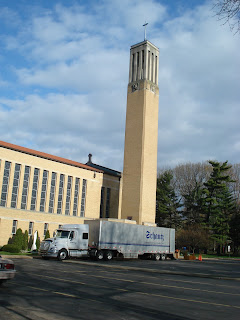 The nice thing is that even though I write this down, post it on line, show people and hand on the information, sooner rather than later it will all be forgotten and the next guy will have fun trying to figure out what exactly are the mysteries of St. Sebastian.
Posted by Fr. V at 6:44:00 AM

So are you saying that there was a built-in holy water "dispenser" in the wall above the holy-water-font-looking thing? And then the font thing caught the drops? I looked up some holy water dispensers and found that most of them have little catch basins below the spigot.

But that still doesn't completely explain the door in the confessional wall. I just reread last week's post and now I understand you to be saying that the door in the confessional wall is just on the other side of the wall from this font thing. So are you saying, then, that the little hole could be where the spigot for the holy water went through? It is a little rusty below the hole, as if water dripped there occasionally. Then there would have to be some kind of reservoir for holy water which could be filled from inside the confessional.

Gosh, that was a tough mystery and a satisfying one to solve.

There was a reservoir of holy water in the confessional? I can't visualize the entire set-up.