FRIDAY POTPOURRI: THEY ARE NOT AS THEY HAVE BEEN

Occasionally one of the complaints lobbed a

t the Catholic Church is that she uses and celebrates things that were of a pagan nature. (“Were” being the operative term.) An extreme example is those who do not celebrate Christmas because the date at one time was the pagan celebration of the winter solstice. But as I was recently reminded at one time even the Cross was a pagan tool and symbol and now is the most central of Christian symbols.

The Christmas wreath was once too an ancient pagan symbol. In fact, our choices of symbols and dates are rather finite in this world and I bet you could find a pagan equivalent for just about every Christian one. The wreath once symbolized everything from the petition for the spring weather to return to an honor to the sun god. Evergreen and olive branches symbolize life and immortality. Thes 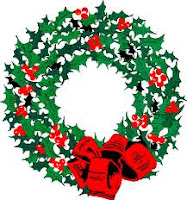 e too have been baptized into the Christian symbolic dictionary.

One way this happens is seeing the wreath placed at center of the Cross. Because evergreens symbolize immortality they are often placed either alone or at the cross beams of the Cross at graves. Readily associated with Christmas the wreath prepares us for the coming of Christ . Often interspersed with holy leaves the sharp edges look forward to the crown of thorns that He would wear and the red berries the blood that He would spill thereby encompassing much of the salvific actions of Christ.
Posted by Fr. V at 8:13:00 AM

Father Valencheck, where do you get this stuff?