NEVER STOP THINKING IT THROUGH

A little bit of marketing goes a long way. Putting the right spin on a topic may sway public opinion in any direction on any particula 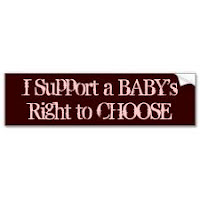 r topic. Just for example, in many circles the Church is labeled as being more restrictive in rights of human beings such as in the case of abortion. Some ways in which this is done is by portraying the teachings of the Church in this matter as being the whim of white haired old men in Rome forcing their morality on women and the rights that they should have over their own bodies; rights that those cranky old men retain while taking them away from women. “Keep your rosaries off my ovaries” is a common slogan.

It is proposed that pro-abortionists are more compassionate because they care about women and extending such rights to them; rights which “the Church” wishes to curtail. The two sides can then be separated into “pro-women” and “anti-rights” camps. If nobody bot 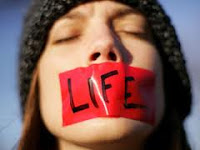 hers to think beyond these first salvos of the argument it seems to be pretty clear who cares more about women, rights, and freedom.

wish not to recognize human life as human life and who feel restricted in their choice to end a human life that is not desired by them for one reason or another, but it cannot be argued (at least I think) that their net of human life to which they extend protection and integrity of life is far smaller than the Church – interestingly enough this is so even with those who are aborted who are female.
Posted by Fr. V at 7:55:00 AM

Fr. Pavone and others also point out that women's bodies (and men's) are legally constrained in many ways but few complain. For example, we are not allowed to consume too much alcohol and then drive; prostitution is illegal. Drug abuse is too, as are "underage marriage" and incest.