A DOG WILL LOOK UP TO YOU, A CAT WILL LOOK DOWN ON YOU, BUT A PIG WILL LOOK YOU IN THE EYE AND TREAT YOU LIKE AN EQUAL

entitled Dogs, “If the dog is loved he is loved as a dog; not as a fellow-citizen, or an idol, or a pet, or a product of evolution.” I am not entirely sure that this is a universally accepted statement. In fact, I know that it is not.

Two of my favorite people in the world have a couple of dogs that they love all out of proportion, at least according to Chesterton. I was invited to a birthday party for the dogs once and the mother of the people with the dogs gave me some tips about attending. 1) They are not to be referred to as “the dogs” but “the boys.” 2) Do not show up without a wrapped present. 3) And most importantly, do not say anything about this being the least bit strange. 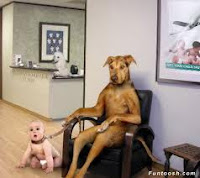 that I had a very good time. The boys went to play in the backyard with their new toys (including my boy that I brought with me) and the adults sat in the living room and drank human drinks out of human glasses held in hands. To tell the truth I did not mind this a bit. The “parents” are lovely people and they perform their parental role with just enough tongue in cheek to let you know, “We know this is a tad over the top,” and just enough tongue out of the cheek to say, “but don’t ruin it.”

There are those however who with tongue entirely out of cheek and flapping quite wildly who believe that dogs, and indeed all animals are on par with humans – or even somehow superior. They have taken a noble and even godly position of caring for the welfare of animals to an extreme desiring animals to have the rights under the Constitution as do human beings.

Not only is this not good for animals, I dare say that it is not good for human beings either. If we are going to give animals such recognition, it also requires something back from them, something they are not capable of giving. Sure, they are affectionate, helpful, and beneficial to human beings in many ways, but in the end they remain animals and to expect more of them is to put undue pressure and expectations on them. I hardly thing an bear that makes its way into a downtown area can be expected to be good citizen or that geese will start observing hygienic laws around city parks. 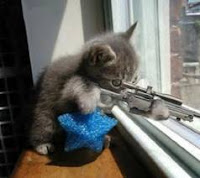 To lose the essence of what animals are is to lose an understanding of who we are. If a snake (an animal like any other) should crawl up to a baby, I will not have a debate about which has a better right to be there. I will take my shovel and beat the snake senseless. And if the baby were going hungry I would have no qualms about serving up snake-kabobs. A human being is, after all, a being with a unique and superior dignity.

But the opposite is also a huge blunder. The mal-treatment of animals is below our human dignity and the dignity of the animals that God gave us. When He handed Eden over to Adam it was not to do with as he pleased, but to tend it and nurture it

not suppressed but increased.” If we understand that humans have a superior dignity, then that does not mean that animals may then be treated willy-nilly. It means that man has a greater responsibility in tending to the welfare of these beings because we have a greater capacity for it. Understanding nature and the proper order of things will allow us to love animals as they should be loved – not as superior beings completely incapable of sustaining such a lofty position, nor as nothing more than objects to be used as we will. When we act like animals or gods, it is the animals that suffer and in turn, so does our human dignity.
Posted by Fr. V at 1:12:00 PM

I love my dog, but in that I know she is a dog, I respect her for her dogginess and treat her as such - and that's why she is such a wonderful dog. (Plus, I raised her Catholic...) ;-)

Not too long ago, I worked at an American Greetings retail store. One of my customers asked that I assist her in picking out the perfect birthday card for her dog...I am still trying to figure this one out! :)

In recent years, the term "human being" has been replaced by the adjective "human" used as a noun.

I suspect political correctness at work. Eliminating the word "being" makes us sound more like animals (e.g., "dogs, cats and humans").

Even some Catholics have bought into the animals are as good as humans nonsense; to wit, from that bastion of orthodoxy, America magazine:
" ... she spoke of liturgy as a means by which the church might present a more positive view of animals and their place in creation. For example, “Liturgies could be developed for people grieving over the loss of a cherished pet,” she said. “Blessing services, too, could also serve a useful purpose, praying not just for pets, but for farm animals, too. But at present, I find little in the church that is helpful.”"
No fear, my progressive friend, we have a blessing service for animals in my family; it starts, "Benedic, Domine, nos et haec tua dona..."

The whole article can be found at
http://www.americamagazine.org/content/article.cfm?article_id=12571