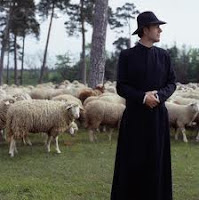 r such things. It was one of those (couple of days) in which there was little free time to do much other than parish duties. Sunday was pretty much like that too. This can be the cause of ending up in pretty interesting outfits.

Of course we were dressed for the Mass schedule and so I had on my cassock. Under that was a formal white short and collar with cufflinks and such. It was donut Sunday and PSR Sunday morning confessions among other things so by the time the 1:00 Mass rolled around we had been so busy that Sebastian had not gone for a walk and he is acting pretty desperate. It was snowing quite hard so I did not want to go out in my nice shoes so I substituted my cowboy boots (complete with spurs) for my dress shoes and we headed out. When we got back there was still a half an hour to go before the Mass was to be finished. Both Fr. Pfeiffer and I had obligations later in the day and would be away, but the Christmas tree had to be brought in that day so that it would relax enough to be decorated for the staff party on Tuesday. I took off my cassock (they are hard to get off with spurs on by the way) but did not want to change completely out of clerics for I would need them again in a short spell. So I grabbed an apron out of the kitchen to keep the white shirt clean and pair of gloves for the moving of furniture and the bringing in of the tree. 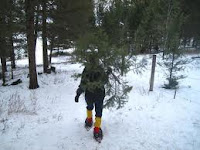 as a mess) so there I was in formal clerics and cufflinks, cowboy boots, cooking apron, and work gloves pushing a vacuum around. I actually didn’t think much of it until my parochial vicar who shall remain anonymous came in, laughing at me and taking a picture with his phone.

It may sound strange but it was immensely practical. When we were done, taking off the apron and gloves, changing shoes, and putting the cassock back on I looked the very picture of a Sunday morning pastor.

So if you should knock on the door of your rectory and find your priest oddly dressed, there is a chance he is not insane but trying to keep pace with the clothing demands of his day in the most economical way possible.
Posted by Fr. V at 9:01:00 AM

"my parochial vicar who shall remain anonymous"
Uhh... you only have one!!
I agree with Trevor, you should pos the picture.

I also want to see the picture.

No mouse this year?

Dear Fr. V.,
On a pretty lousy morning here I stopped to see what you had written and you made me laugh out loud!! It really felt good to laugh relieve some of the stress. Thank you!
Really would love to see that picture.....
God Bless...