FRIDAY POTPOURRI: WOULD YOU LIKE TO SWING ON A STAR?

The Star of David is for many people a symbol of Judaism in much the same way that the Cross is a symbol of Christianity. 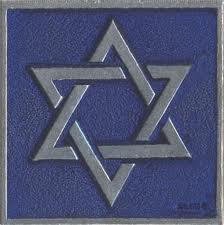 Much to my surprise however it is a relatively new innovation (and by that I mean no more ancient than the Medieval Period) and not necessarily universally accepted.

The term Star of David was originally the Shield of David and was not first used in association with the six sided star. Later they became synonymous and the term cemented into the Star instead of Shield of David. Though in use in many different ways since that time, it did not become a general symbol of Judaism until the 17th century and only recognized internationally in the 19th century as symbolizing the Jewish people in both religiously and secularly.