And in a completely irresponsible way I blew off part of Tuesday on a fun errand. The reason for the trip will be explained in the New Years Eve bulletin for the parish. (You can go here to read bulletins, read about the parish, hear our homilies, etc. . .)

I was window shopping the way someone who doesn’t really need a car goes and looks at cars. I was invited by the Schantz organ company to come look at their facility. As I left St. Sebastian I said, “Shucks, I forgot my camera,” and the first thing they said when we got there was, “Take as many pictures as you like.” I wanted to share the trip with you pictorially but . . . 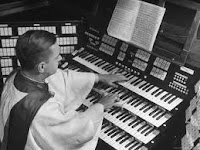 According to the documents of Vatican II, Musicam Sacram, para 62, “The pipe organ (my note: notice, not the electric organ that sounds like a pipe organ) is to be held in high esteem in the Latin Church, since it is the traditional instrument, the sound of which can add a wonderful splendor to the Church’s ceremonies and powerfully lift up men’s minds to God and higher things.

“The use of other instruments may also be admitted . . .” Clearly the pipe organ (after the human voice) is the first among equals. And wonderfully so. One person like a spider at the center of a giant web can, by using every available limb, mimic the sound of an entire orchestra. And unlike its electric counterpart, worthy as it may be and helpful when the means to obtain a pipe organ are not available, it is more earthy, more organic. It just doesn’t SOUND like what it is supposed to be, it IS what it is supposed to be. Air is pumped into a giant pressurized lung, and when the organist pulls out a certain stop (or channel) for the air and then presses a key, the air rushes through tubes until it reaches a pipe of metal or wood, blows across an opening or vibrates a reed which starts the pipe resonating sending a sound out i

nto the nave of the church.

The technology for making organs, like making stained glass windows, has not changed much over the centuries. The organ company makes their own metal by combining lead and tin in different proportions depending on the sound they desire and pours them out in sheets. Someone then cuts out the parts of a pipe (there are more than you might think) so that they are laid out in flat pieces much like they might look if you cut them out of construction paper before assembling them.

They are then rolled and soldered, their constituate parts added, then they are bro

ught to the sounding room where they are set up on a work organ so that they may be tuned with all of their brothers and sisters. They are then cleaned and stored.

While this is going on, the carpentry shop is making the wooden pipes as well as the console and the other wooden components. The whole thing is then assembled in the assembly room before it is taken apart again to be ready for shipping. We saw part of one being constructed. It would contain about one quarter of the pipes of a gigantic organ that the company was working on for a Jesuit parish somewhere on the east coast. This piece was three stories high and big enough for a small family to live in. 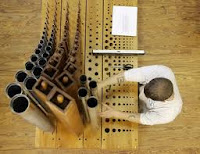 d to the instrument. This is of course a major step forward from the days when some altar boys would have to spend the Mass pumping giant bellows to make the instrument sound. Then there is the pipe – like steam pipes in your house for heat, that take the pressured air to the instrument from a separate room (it would be too loud to have in the Church) to the organ and all of the separate notes in as complicated on a very large scale as a computer chip board is on a tiny one.

ally the whole thing is shipped out to its home where it is installed and every pipe and note must be tested again for tuning and proper air pressure to make sure it blends will not only within its rank, but the overall organ as well as the space in which it will live.

Quite an undertaking! Quite an instrument! Quite a lot of talent and old word craftsmanship!
Posted by Fr. V at 8:36:00 AM

19. The employment of the piano is forbidden in church, as is also that of noisy or frivolous instruments such as drums, cymbals, bells and the like.

20. It is strictly forbidden to have bands play in church, and only in special cases with the consent of the Ordinary will it be permissible to admit wind instruments, limited in number, judiciously used, and proportioned to the size of the place provided the composition and accompaniment be written in grave and suitable style, and conform in all respects to that proper to the organ