I will admit to you that I never understood the Infant of Prague and lately He seems to be determined to make His way into my life. A couple of months ago Fr. O brought by this statue for use in the rectory chapel most recently approved for use by our bishop. 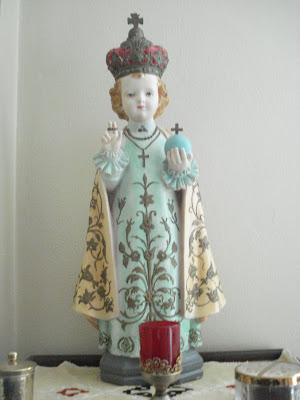 I remember a small Infant of Prague statue in my Grandma’s house. He sat on a shelf on the wall over the television. He was small, with a chip in his crown, and wore red. There were also statues of Him in all of the classrooms of my home parish school building much like the one pictured above as well as one in the church. On Saturdays I made about $20 a month as a kid for being one of the weekend janitors at the parish. We would mop floors, clean windows (at which I was very inept), and various and sundry other chores. One of my responsibilities was to make sure that the Infant of Prague statue was wearing the liturgical color of the day. The purple cope of lent would give way to the gold of Easter along with the matching material in His crown. But I had no idea why there was this odd and interesting depiction of the infant Jesus.

This past month a friend of mine vacationed in Prague and actually saw the church and the statue itself. He and his wife saw a priest in the church and greeted him. The priest took them on a tour and told them to help spread devotion to the child Jesus again – the Infant of Prague – for devotion was waning. He told them the story of the Infant of Prague, they told me, and now I tell you.

I guess it would not be inappropriate to say that this image is to my grandma’s day what the current Divine Mercy painting is to many people today. It is found in many homes and older churches so it seems appropriate to figure out exactly what the interest in this statue is. To begin it is simply the infant Christ dressed in royal clothing to show is dignity and kingship over creation even in infancy. It was actually crafted in Spain and brought to Prague and kept in a modest Carmelite monastery.

Apparently Bohemia, of which nation Prague was the capitol, was under constant attack from its various neighbors and so life in Prague was not a bowl of cherries. But with the arrival of the statue attacking armies 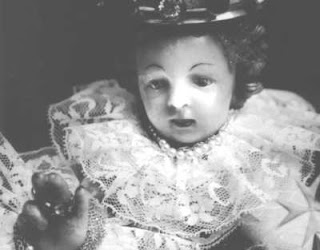 withdrew, the sick recovered, and the city experienced a kind of Renaissance. This was attributed to the Christ Infant and his great love for His faithful people. Then a particularly cruel attack came to the city, killing its inhabitants and ransacking and destroying its riches and buildings. Even the monastery was not spared with everything of value being carted off except for the Infant of Prague statue which was seen as “a silly doll.” The soldiers chopped of the hands and tossed it into the trash.

The Carmelites were able to return to the ruins but the city met with one raid after another, further exasperated by the Black Plague that was sweeping the area. One night, it is reported, one of the brothers was praying in the church alone and heard an infant crying. Not seeing anyone else in the church he began to look around. Eventually, in a pile of rubble behind an altar he found the Infant statue sans hands. The statue was again put on display but the ills of the city did not vanish. In a vision the Child told the brother that He needed His hands back so that he could bless the city once more. This request was a matter of concern since the brothers barely had enough money to eat.

One day an old soldier came to pray and noticing the handless statue and being reminded of the children he had seen maimed in war left money for the hands to be restored. Now, apparently artists were found to make hands. But when hands were made and attached, the next day they would be missing. This happened a number of times. (They did not have security cameras back then as we do now apparently) until one day a young man came and asked to have a go at

it. It is said that he examined the statue carefully and delicately like a doctor and patient and new hands somehow miraculously appeared, one now raised in the familiar sign of blessing. The next morning the hands remained and did so ever since and the brother was told in a vision, “The more you honor Me, the more I will bless you!” The infant Jesus has since not ceased to perform miracles and give graces the world over.

Email ThisBlogThis!Share to TwitterShare to FacebookShare to Pinterest
Labels: Infant of Prague

I have a devotion to the Infant of Prague, mostly becuase he keeps appearing in my life, and has for years. I have a small medal that was given to me a couple years ago, obtained by a Slavic Sister when she visited the Infant in the very church you cite, and had the medal blessed there.

A few months ago, I was dealing with a particular issue and as I was leaving the church, saw on the pew next to me a holy card with the very words I couldn't seem to pray, and of cousre, it was the Infant. I also have an Infant of Prague statue on my computer, can't afford to get one for my home.

Everywhere I go...there he is. Everywhere.

And...reacently learned he is also the Patron of Vocations. :-)

The Shrine in Carey, Ohio also has an Infant of Prague statue of particular importance. I can't remember all the details, but perhaps you could go and see for yourself. It's probably only a couple hour drive for you to get there.

My husband and I have 2 statues, 1 large and 1 small that we kind of inherited from our families. They have been sitting on a shelf in the wall unit in the front room and I had forgotten about them. Since Adoro mentions that He is the patron of vocations, I'll have to put Him in a more prominent place and start praying to Him!

Hi, Fr. V! Thanks for that story! My grandmother had a statue of the Infant of Prague in her bedroom. We keep it there still. It's nice to know its history.

By the way...missed you last night at the Chrism Mass!

Just got a mailing about the Infant of Prague a week ago:

Being Polish, my grandparents had a statue of the Infant of Prague on one of their shelves in their living room. One day in particular, when I was little, I remember vividly. We wanted to have a picnic outside on the grass but it was raining, actually, pouring. My grandmother said to go before the statue and ask for Jesus to halt the rain so we could have our picnic. I did. About an hour later, the rain subsided, the sun came out and dried the grass enough to lay the blankets & have our lunch picnic.

After my grandparents died, we brought the statue back to our house. It is proudly placed on a shelf.

Wayne - yes, the Infant of Prague statue in Carey, OH is amazing! Also there are many, many people who have made copes for the statue - beautifully made & displayed. Carey is actually about a 4 hr drive from Cleveland - all back roads.