This is part of a series exploring what there is to see on the very boarders of Saint Sebastian Parish in Akron.

At this point we find ourselves having to traverse straight through the woods and hills of the Metroparks with no easy way just to swing around on any convenient roads. Here are two options: You might either turn left on Smith, turn left on Sand Run Road, and then pick up the boarder again by turning left on Thurmont. 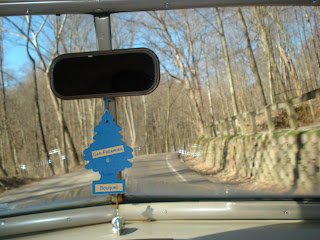 What I did was turn around until I returned to Portage Path, turn right, and then turn right again onto Sand Run Parkway. A good distance down the road you will hit this nifty little feature. This is the ford where Sand Run actually crosses over the street. I remember as a very young child going for a Sunday afternoon drive and coming upon this unusual sight and the street sign that proclaimed, "Ford impassable after heavy rain" and wondering what was wrong with Ford cars that they were singled out as being incapable of crossing over this little bit of water after a rain storm. I think I was in my 20s before I spent enough time thinking about this to pull me out of my childhood musings. 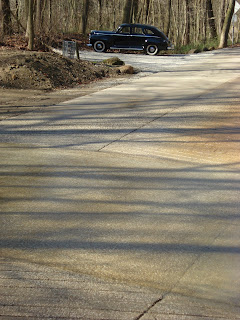 Well, the boarder picks up for a little spell along this road and the abruptly turns left and goes throught he woods again. Our only choice is to continue on until we get to the intersection of Sand Run Parkway and Sand Run Road. (Do you see how this might get confusing?) Turn left, and when you reach Thurmond turn left and then on the second road (here is where I THINK streets might have changes names, so I think it is dubbed Winslow Avenue) turn right and once again we are on the parish boarders, the parish being to your left.

Here we pass through a nice little nieghborhood until we hit Market Street. We should continue on White Pond but it is closed off to through traffic and so we must once again make something up. Turn left on Market and the right on Frank Blvd. This will take you back to White Pond. Turn left and we follow White Pond over the highway and past White Pond until this road dead ends. Turn left on Coply for a short jaunt and then emmideatly make a right on Collier. We follow Collier past farms and nursuries until it dead ends onto a road that may or may not be called Wadsworth Road anymore. (You may remember I said I was using an old map.) Regardless turn left. This road dead ends into a road that may or may not be called Wooster Road. Turn left again. 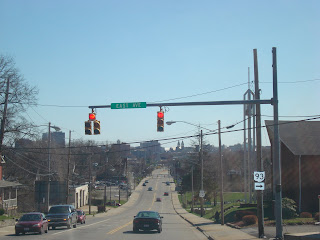 Eventually you will come over a hill and be given an interesting view of Downtown Akron. If you can spot the twin towers in the middle of the picure that is Saint Bernard, one of our neighbors. It is a beautiful church that was rumored to be closing but was saved from the axe. Don't stare too long though, you need to keep an eye out for Mallaston Ave and it is not well marked. Turn left, goa short distance and then turn left again on Euclid Avenue. This will twist up and hit Diagonal Road. Turn Right. We have just skirted around the Akron Zoo which is actually in Saint Berbard so is not pictured here. 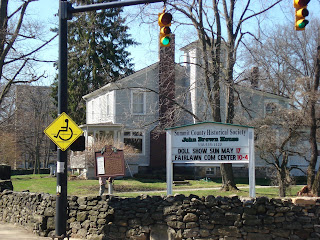 On the corner of Diagonal and Copley we see the John Brown House. According to this web site, "The Akron home of abolitionist John Brown stands at Copley and Diagonal roads in West Akron. Brown moved here in 1844 and worked with Simon Perkins, Jr. in the wool trade. The Perkins' family mansion still stands across the street from Brown's home. The famous abolitionist moved on to win fame in Kansas and at Harper's Ferry. He is now recognized by a permanent exhibit showing his significance as a symbolic hero and martyr of the anti-slavery movement." (The Perkins mansion is half a street off of our project and so not shown here.) 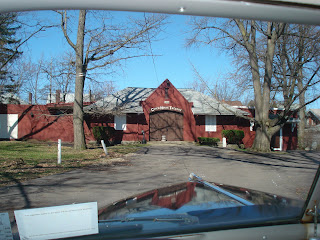 As we cross over Copley we find ourselves back on Portage Path South and almost done with our tour. Coming up on our left is Coach House Theater which I believe is run by the Akron Women's city club. Here is the only site I could find for them which makes the promise that a new web site would be coming soon. I worked at this inimate little theater when I attended the University of Akron running the lightboard for a production of "Night Watch." 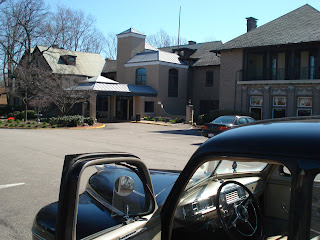 Finally we make it to the Akron Woman's City Club. Their website explains, "The Akron Woman's City Club was established in 1923 as a place where women could meet to discuss subjects of interest, hold seminars for education, promote charitable events, and serve as a social center and meeting place for women of Akron. Today it remains one of the oldest and largest clubs for women in America." 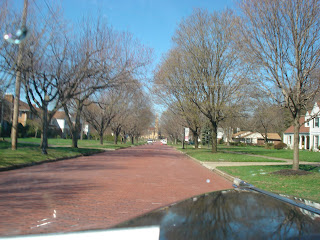 A hop, skip, and a jump further and we are back to the Indian, the starting point of our journey. So we turn left into the heart of our territory and back to Saint Sebastian.

Hope you enjoyed the tour.

Your first photo is hilarious. I can't see the forest for the "tree."

When you were in the Akron City Women's Club parking lot, you may have noticed the fence that separates the backyards of the homes from the parking lot. Only one yard has a gate from the yard to the parking lot. It is also very close to the First Grace Garage. This yard has a two shade grees, no grass and tons of kids toys all over it, and a garage that needs painting... guess who lives there? : )

LOL! I had to go back and look at the picture to see about which tree you were speaking!

E - Cool! Wish I would have known before! I'll have to check it out!