FR. LIVINGSTON I PRESUME? PART I

The Monday of Easter Week, the rectory being closed and having a little bit of time to get away, I decided to finally hop in my car and drive the parish boundaries. This is more easily said than done. The first mistake was grabbing a map from the history room in the basement of the house. Streets have closed and others been renamed since that map was drawn. Then there is the problem of the repetitive naming of streets in the area; Portage Path, White Pond, and Sand Run all stamped on road signposts for multiple streets. (Sand Run parkway, Sand Run Road . . .) The final problem was that parts of the parish boundaries run down the center of rivers and through wooded areas. But after a few false starts, success was had.

This short series will list some of the interesting things that are found on the boarder of the parish boundaries. There are some interesting interior spots also but that will have to be the subject of another set of posts. Below you see me and Sebastian (in the back window) getting ready for our big adventure. I hope you enjoy the ride. Here we go . . . 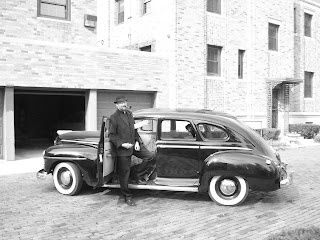 For any parishioners who might want to follow this trial someday we are beginning on the east side of the parish boundaries at the corner of Market Street and Portage Path (where Portage Path divides and becomes Portage Path North and Portage Path South) known as Highland Square. Much of the information that follows is from a site called Dear Rosemary that has a lot of interesting facts about this area. We turn right and head north on Portage Path. The parish boundaries stretch as far as the space between the double yellow line running down the middle of the road so we will only be looking to the left!
One of the first things you will see is this statue of an Native American that is reported t

o be a rather accurate depiction of the Native Americans that lived in this area. I guess it used to sit on the devil strip until National City Bank gave it a proper little park to sit in. For those of you who do not know what at devil strip is it is local lingo for a tree lawn. You will even see it on street signs, "No parking on Devil Strip."

There are a number of interesting things about this road called Portage Path. One of the interesting facts is written on the plaque below the statue. "A POINT ON THE PORTAGE PATH OR INDIAN TRAIL, until 1798 a part of the western boundary of the United States. Erected July 4 1905 by G. F. Krasch" Hard to believe that this city parish would have been the wild western wilderness beyond the United States border not all that terribly long ago! 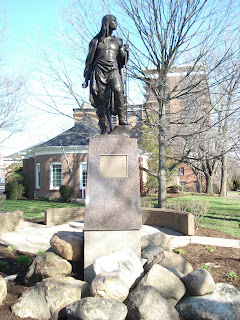 Though not actually located next on our journey (it would be seen toward the end) I wanted to show you this Ohio Historical Marker that explains the history of Portage Path. It says, "PORTAGE PATH - You are standing on the famous portage carrying-place between the Cuyahoga and Tuscawarus rivers. The two streams and the portage across the watershed formed an early route between Lake Erie and the Ohio River. First the Indians and then French and English traders and trappers, then finally American settlers and travelers carried their canoes and packs across the narrow strip of land in passing, by way of the rivers, between northern and southern Ohio. The portage was part of the defined boundaries in the treaties with the Indians made at Fort McIntosh (1785), Fort Harmar (1789), and Greene Ville (1795). Use of the portage was discontinued in 1827 when the Ohio and Erie Canal was built along the old trail. Today, modern Akron streets - - Portage Path and Manchester Road - - follow the approximate route of the original portage."

To add to this story there is a tiny park with a 12' Indian on a horse made by local artist Don Drumm (not quite as authentic as the Indian above) within the parish bounderies that was once dubbed Watershed Park - not pictured because it is not on the boundary. The water north of this park makes its way to Lake Erie, on the south side down eventually to the Gulf of Mexico - unless city sewers have a say in the matter. 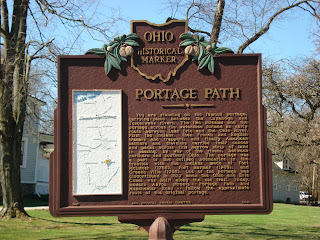 As you drive along Portage Path you will spy large arrow heads (about 2' high?) that mark the portage. 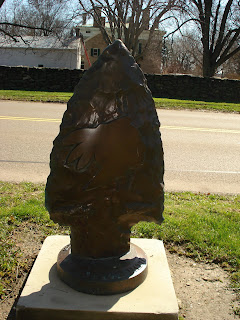 Father, thanks for "adopting" our parish and making it your own. (By the way, is that an ax by your front seat?).

You can SEE that?! Good eyes. Yes. I'm telling you, I had to go through river and forest to see the parish bounaries. (But the axe was just a prop.)

That is very funny! I studied the black and white for any hint of the 21st century and did a double-take as to what was leaning against your seat in the car.

If you look closely you can see my other car in the garage - but just barely.