A few more paces down the road finds us before Stan Hywet Hall and gardens. The Ha

ll was closed for the season and there was an ugly van parked by the main gates and so I was unable to snap a picture for you. But here is their website. I’ll let you read more about this magnificent structure there save for this tidbit, “The Manor House is one of the finest examples of Tudor Revival architecture in America. The Seiberlings chose architect Charles S. Schneider to design the home for $150,000. Schneider and the Seiberlings travelled to England and visited well-known homes including Ockwell’s Manor in Berkshire, Compton Wynyates in Warwickshire and Haddon Hall in Derbyshire, influencing the design of Stan Hywet.” 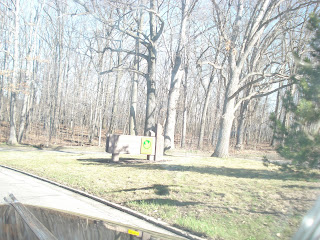 After passing the Hall you will start a descent into a valley. A sign welcomes you to Sand Run Metro Park. (This is also where the parish boundaries begin to become difficult to follow.) The website for the park reports in part, “The 992-acre Sand Run Metro Park opened in 1929, but the area has been welcoming visitors for centuries. The land surrounding Mingo Pavilion was a campsite for Mingo Indians. Portage Path was once an important Native American trail between the Cuyahoga and Tuscarawas rivers; later, it was the western boundary of the United States. A high ridge above the Wadsworth Area was a lookout point for General Elijah Wadsworth, who made his camp near the present-day Old Portage Area during the War of 1812.”

Not too far after passing Merriman Road Portage Path crosses over a river. The center of this river is the northern limits of Saint Sebastian. Perhaps someday with a canoe this route could be explored but for now I will stay safely in the car, back up and drive down the valley for along the southern bank of the river there are at least two sites of note. 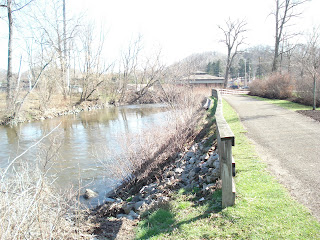 The first is that of the Tow Path Trail. According to the site for this part of the trail it reports in part, “The Towpath Trail is a piece of history. This segment of the Towpath was originally constructed in Akron from 1825 to 1827 as part of the Ohio & Erie Canal. It served as the path that mules and horses walked to pull canal boats. The trail is on the flood plane between the Cuyahoga River and the Ohio Erie Canal. It now serves as a hiking/biking trail.

Also situated along this most northern part of the parish is Weathervane Community Playhouse which you can see from this picture is undergoing some renovations. Their site reports in part, “From 1935 until 1951, Weathervane was housed in a modest carriage house barn on Marshall Avenue in Akron. The 'barn,' as it was known, has long since been destroyed but there are still a few people who recall its cramped quarters and especially the energy and devotion of the four ladies, Grace Hower Crawford, Laurine Schwan, Helen Troesch and Muriel MacLachlan, who believed that Akron deserved the best in theater and that volunteers could make it all happen." 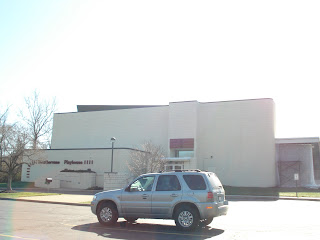 From here we hit the corner of Merriman and Smith Roads. The parish boundaries now turn south and cut back through the woods. Thus the reason for the axe in the front seat of the car. But no venture was made into the woods this time so we will pick up (and most likely finish) tomorrow with the approximate ventures of the border patrol.

Did you take Sebastian for a hike in the woods of Sand Run while you were in the area? Great hiking trails through the woods.

Amazing. I wonder how many of us know the extent of the parish territory. Maybe we need to bless the perimeters somehow.