A mystery has been solved. Fr. Brunovski who is the pastor of St. Hilary parish (and who pointed out that I have been spelling Hilary with one too many “l”s, contacted Adam’s Ale to clarify some of the mysteries of the St. Hilary window reported here a few weeks back.

What was not reported in any of my books is that St. Hilary is patron saint of Unruly Children. This little nugget of information came from the ordo, a place I failed to look. That would explain the child in our window as well as a similar depiction in the St. Hilary window at St. Hillary’s down the road. They too have a snake in their window as well as a broken pedestal. “These symbolize St. Hilary’s overcoming of his pagan past,” I was informed. Thank you father!
Queen of All Saints 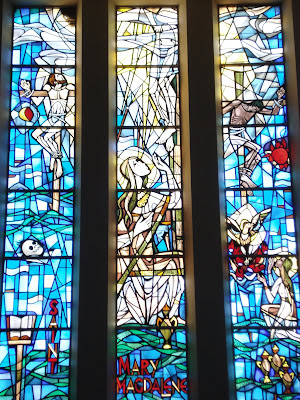 Our first window shows Saint Mary Magdalene at the foot of the Cross during the crucifixion as we can see the two thieves at either side of Jesus. She was a witness of both his death and of His resurrection. So to the left we see the skull, a remembrance of death, and to the right a phoenix, a symbol of the resurrection.

The reason the phoenix is a symbol of the resurrection is because ancient mythology said that the phoenix was a mystical bird that, when it grew old, would dive down into the flames of a fire, only to rise from it rejuvenated. Baptizing this mythology we can readily make the symbolic jump of Jesus’ death and rising to new life. As Mary was a witness to this we see her here watching the phoenix rising from the flames.

To the bottom left is the Gospel in which her life is recorded and to the right are the jars of oil with which she intended to anoint the body of Jesus. 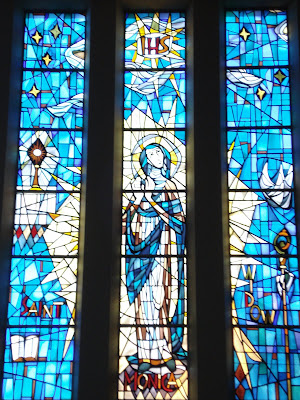 Saint Monica was the mother of Saint Augustine, who was not such a saintly younger person. This should give even the most tried mother hope. She prayed ceaselessly for her wayward son. Here we see her lifting her prayers to Jesus represented by the letters IHS, a monogram for Jesus using the first three letters of His name in Greek: IHSUS. To the right we see the fruit of her prayers: a crosier which is a symbol of the office of bishop which her son, after his conversion, became and from this office became a saint.

Constant prayer even in the face of seemingly helpless odds takes much courage in strength. To the left of her we see from where her courage and strength came, the Eucharist and Holy Scripture.

I didn't know that about St. Hilary.
That is good to know.

This is good to know! I should be asking for his interecesion 24/7!

I have been praying to the Holy Spirit about my 9th period class. The class from h***. St. Hilary is my new best friend!!