Here are the last two saints. They are actually under the category of Queen of All Saints but they are also in the choir loft, the last of the really big windows, and as you might imagine they deal quite extensively with music. 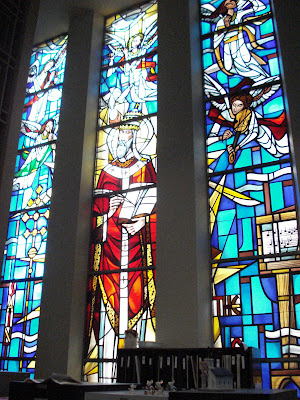 The first is Saint Gregory the Great, a pope as we can see from his triple tiara and (difficult to see from this angle) papal crosier. He composed many important writings for the Church, in fact he is also called a doctor of the Church, and so we see him holding a book and quill with the Holy Spirit, his inspiration shining down upon him. Next to him is a music stand holding some notations in Gregorian chant. Gregorian chant is indeed named after this great saint though his exact connection to it is lost to historians. He is patron saint of music and is invoked against plagues. I can attest that no plague has broken out in the choir loft since this window’s installation in 1958. 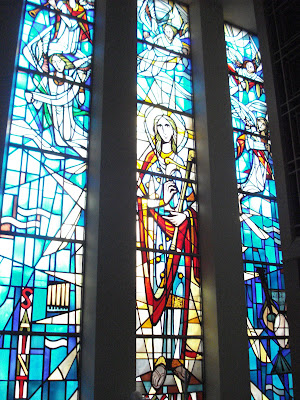 The second window is of St. Cecilia. She became a patron saint of music after Gregory though there is no understanding of exactly why. There may have been a miss understanding of a Latin phrase that stated that she played the organ at her own wedding, hence she is usually depicted playing the organ represented in this window by the tiny pipes in the lower left hand corner. In fact she may not have been very Vatican II friendly in some people’s estimation for it was said, “As the organ played she sang to God only in her heart.” Hence we see the angles singing with her in this window. Very progressive for a window in a church for 1958 this window also depicts angles playing drums, guitars, and a whole plethora of other instruments. Cecilia herself, mouth closed and singing to God in her heart, plays the harp and wears the martyr’s red. She is patroness of music and musicians.
Posted by Fr. V at 6:05:00 AM

“Put another nickle in, in the nickelodeon, all I want is loving you and Music, Music, MUSIC”