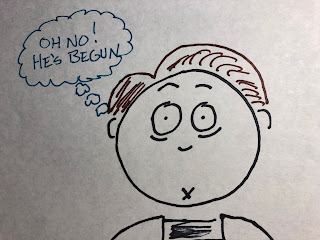 It was a challenge trying to put on the Easter Vigil Mass that normally takes about 100 ministers with out only seven people.  On top of that was the extra workload of trying to record and live-stream the event!  The Roman Rite isn't really written for pandemics, stay at home orders, or a dearth of people.  And the priests could only take on a limited number of extra tasks during the liturgy.  That left the remaining FIVE to take up the slack.  Of that number, one was an organist and one was cantor and THEY were in the CHOIR LOFT.  So, in actuality, that left Ian (our seminarian intern), Karen (our sacristan) and Wayne (half our technical team) to do EVERYTHING ELSE!

There were all kinds of behind-the-scenes goings on that, for the most part, I think people missed.  For example, during our rehearsal I realized there wouldn't be a bevy of servers around to pick up the purple material as I stripped it from the Cross on Good Friday.  So I dropped the material on the ground and the cameral followed me to the left of the sanctuary as I put the Cross in the stand and Karen would run out and pick it all up.

Also, I think we were able to hide most of our mistakes.  I had at least two major gaffs at the Easter Vigil that so far nobody has brought to my attention and so, for now, they will remain a mystery to all but me (and I am fine with you letting me live in my fantasy.)

One of Ian's jobs was to make all of the responses.  When we came to the Renewal of Baptismal Promises, his job was to come to the ambo and say, "I do!" when I asked, "Do you reject Satan?"  "And all his works?"  "Do you believe in God the Father," so forth and so on.  And I really wanted the people at home to get into this so I talked it up. 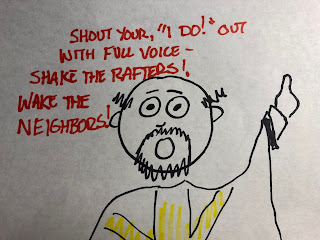 Ian, busy with - well - just about everything else heard that I was beginning the promises and had to come running from the other sacristy which at this point might as well have been in Iowa. 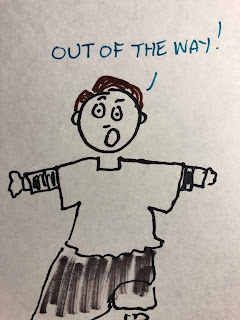 The hallways were crowded with all of the furniture and other things that we weren't using since there were only two of us in the sanctuary and much of the Easter Vigil was cut due to lack of people present.  But Ian was faster than a flying thurible, leaping over prie-dieus, dodging wires, cameras and extra chairs . . . 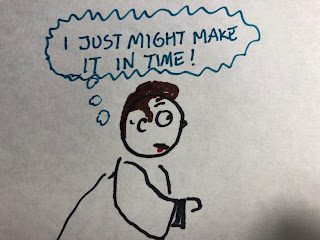 He skidded out into the sanctuary, patted his hair and straightened his vestments, and the hardy voice and full lungs was able to shout out . . . 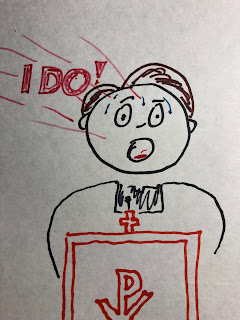 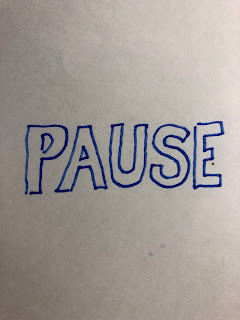 And that is the excitement and drama of live-streamed liturgy. 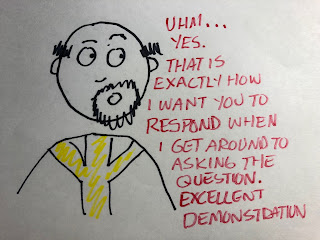 Yes for those of us that were blessed to partake we did feel the excitement from the extra duties and everyone’s commitment to perfection! We loved every minute and actually heard things that touched us unlike other years! Thank you all!

It is so interesting that being virtually on the altar with you makes Mass so much more personal and intimate, I am normally in the choir loft so very far away. I believe Mass will take on a very different perspective for me when we return to our spiritually beautiful home. Thank you Fr V, Fr S. and your "helpers" for getting us through this difficult time.

It was such a beautiful Mass. And I didn't notice any glitches.

Ian Kelly is going to make a fine priest someday! I did not watch the Vigil from St. Sebastian (I watched ours from St. Bernard), but with your description and drawings I could easily see Mr. Kelly doing his duty to serve Jesus and His Church! I am certain the seminary did not teach any of you how to deal with a pandemic, but I am delighted with and touched by the response from all of you, my own good priests (Fr. Chris and Fr. Frank), and all the Akron-area priests. You are all keeping us connected to Jesus, the Church, and our parishes in so many ways. You have no idea how much we appreciate all the ways you are taking care of us. I know because I have talked to other parishioners - we feel very blessed. I always admired the priests here in Akron - especially ours at St. Bernard - but I have a new appreciation of how far you are willing to go to serve the Church, and by extension, us. This is truly the meaning of a vocation, not a job or a career. It is something very special and beautiful. Sorry to gush, but that is the truth, and I cannot help it! Thank you, Reverend Fathers (and Ian)! Sue from St. B

When the world gets back to normal, people will be referencing St. Sebastian's Mass productions as examples of how televised Mass should be! Perhaps Ian will become the first Catholic Priest to win an Academy Award for his production work. They are outstanding and I know they bring us together as a parish. I can't tell you the appreciation that my family and I have for them.

We did shout our responses... and our neighbors left.

My Daughter-in-law was disappointed that their home parish was live-streaming the entire Holy Saturday liturgy with the lights on.

So, she switched to the St. Sebastian live-stream, because she fully expected that our parish would start with the lights out and then turn them on at the appropriate point in the liturgy.