This was the year a young Ellen Martucci began playing the organ.  Mrs. McDonald was the only organist at the time and wanted someone to help so that she could take a vacation.  So she went to the nuns and asked who played the piano.  “Ellen plays well,” she was informed and so she asked Ellen if she would like to play.  She did and Mrs. McDonald was able to get away.

Ellen later joined the choir.  Coming to the practice one day, Fr. Zwisler asked to speak with her.  “Tomorrow there is Mass at 6:00, 7:15 and 8:00.  Be there (at the organ) and then meet me in the rectory for breakfast.” 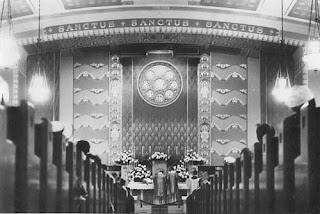 Ellen worked for her Father at the time at a job she did not particularly enjoy.  When her Father said he expected her at the job the next day she responded, “I can’t!  Father wants me to work for him playing the organ!” much to his delight and hers.

Ellen served as the official parish organist until her retirement in 2011 although she continues to play for daily Masses.  When asked how she was able to work with Fr. Zwisler all those years she said, “I knew what he wanted and how he wanted it done!  If you don’t you quit!”

The organ in the original church was Conrad Prestly Organ and was removed in the late 1970s due to disuse and neglect.  After the original church had been turned into a hall where children ate their school lunches, Fr. McCann reports, the students would try to throw apples up into the pipes.  The organ was then sold.

I Remember guitar mass with Fr. McCann. Fond memories of the 70's at St.Sebastian...