In Ephesians Paul instructs us, "Husbands, love you wives" because as it turns out, God really knows what He was doing when He said, "It is not good for the man to be alone."  Now, there are exceptions, and I am perfectly happy (as an old bachelor) with the rule about celibacy - but every once in a while I get why it works out well that the "two become one."

So the other day a friend and I took Sebastian for a walk in Forest Lodge.  While there I showed him a tree that was dead beyond dead.  The trunk soared up into the air without one branch on it.  The bark was completely gone.  Bugs and woodpeckers made it look as though it was used to for target practice.  And if you hit it, the whole thing all the way up would wobble like a tuning fork - probably a pretty dangerous and stupid thing to do.  A wife would say, "Stop that you big dummy.  That is dangerous."  But as a guy I just thought it was cool. 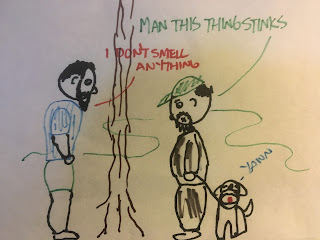 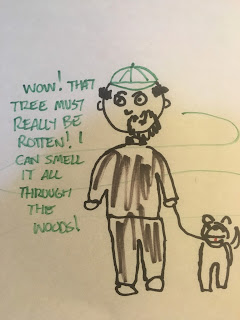 How could he not smell it if I could still smell it at some distance?  Ridiculous.

But then I started smelling at other times. 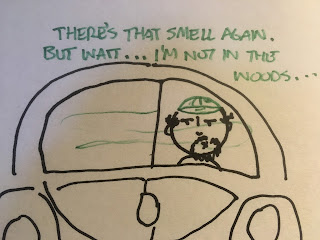 Was my shirt not clean?  That seemed Okay.

Was it something I ate?  That didn't seem to be the case.

Then, once, taking off my cap to wipe my sweaty, bald pate I realized with horror and great sadness that it was my baseball cap. 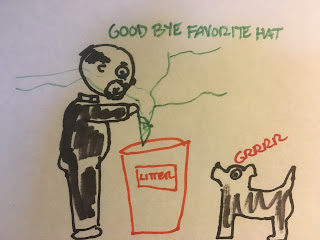 How many times did I hear my Mom say to my Dad, "Bill!  Take that off!  You are not leaving the house in that!  It is disgusting."  Remembering things like that I am always trying to be extra cautious.  But things still get by - like forgetting to put on my collar in the morning and DESPITE TELLING PEOPLE IT IS OKAY TO SAY SOMETHING NOBODY TELLS ME I LOOK MORE LIKE A GOTH THAN A PRIEST!  So did the hat slip through the screen.  It is not good for a nose to be alone - it needs a helpmate!
Posted by Fr. V at 8:11:00 AM

The green one and the white one have seen better days. Just sayin'.

NOW you tell me?! lol

Couldn't you wash the hat?

White vinegar in the wash will neutralize a lot of disagreeable things!

Suggest Woolite in cool/lukewarm water. Swish the hat around, then let it soak half hour, then rinse with cold water and let air dry.