I did not expect to write to you until much later today. It was 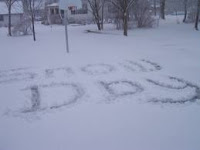 supposed to be a very busy morning. But instead it turned out to be rather more relaxed.

Yesterday was a whirlwind day not ending until about 8:30. Today I have a funeral but was in no state to write something thoughtful by the time I was able to find time to write last night. So instead I set my alarm clock early and thought to wake and write this morning.

So the alarm reached over and whapped me on the head and I got up surprised not to see St. Augustine staring at me from the church as he is want to do in the winter when it is dark outside and the lights are on in the church and his image glows seeming to be staring at me through my bedroom window. Odd, I thought and went to the window. It was not snowing nor was Mull Avenue particularly covered with snow.

I woke up the house, turning on the lights, the coffee pot, feeding the dog and gathering materials for writing a homily – one of the few hours when the house is quiet and can walk around in my bathrobe and not fear running into anyone. Information and writing utensils in hand and steaming mug of jo I sat in my sitting room and thought of what to say for a family who lost their father who retired from this life after living for 89 years.

Half way through writing I noticed there were no lights coming on over at the school. Curious. Was I up too early? It had been a habit of mine for a while to DREAM that my alarm clock went off and so get up and get ready for Mass before realizing I had another hour or so of sleep coming to me. So I consulted TWO clocks and then looked outside again at what appeared to be a wintery but not so terrible day. (I had yet to actually go out in it.) 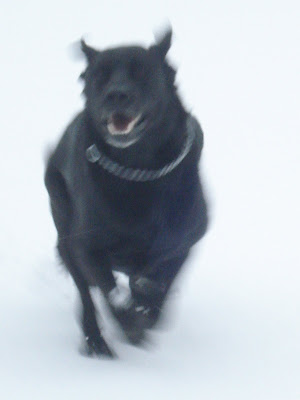 Another few minutes go by and there are no lights, no cars, no commotion. “IT’S A SNOW DAY!” Before the funeral there was to be school

confessions and so a very packed morning – but not now! I finished the homily I bundled up, grabbed Sebastian and went to play in the park for a little while. He had a number of friends there to play with – others had the same idea including L.B., off from school and walking Fluffy Molly and they tore around the park kicking up snow as they did so.

After a little while out there it became apparent why school was cancelled – but I am looking forward to the after lunch constitutional with Sebastian just the same.
Posted by Fr. V at 7:22:00 AM

My alarm went off at 5am as usual but just as my feet hit the floor I got a text message from WKYC saying school was cancelled. YAY!! Wasn't looking forward to another 3 1/2 hour drive across town. These unexpected days off are so much more appreciated than the scheduled ones :)

When my son was in 6th grade, he awoke early on a dark January morning, thinking it was time to get up. He let the dog out, then fed him (the dog being only too happy to eat) and then discovered that it was 3:00 am.

Buster the dog got an extra breakfast that day.