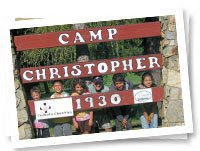 I’ve been to camp more as a priest than I have during my childhood. As a kid I never made it to Camp Christopher, a CYO camp run by the Diocese of Cleveland. My sisters who are significantly older than I (don’t tell them I told you so) did go there however in the early 60’s. My parish school closed shortly after that and so I did not attend (things like that happened back then too.) But I did see an 8mm film (you young’ns will have to ask your parents what that is) of my parents dropping them off at the camp gates hair all done up in a beehive or some near approximation thereof.

Then about eight years ago I was asked to come out to the camp to say Mass or hear confessions or some such thing. Never having been there I had to get directions. Once I was there I knew the place directly for it had not changed one iota since at least the 1960s! The major differences were the new cars and the children were wearing jeans and had sensible hair.

This past week I was back at camp again with my WWII U.S. Army Mass kit in tow to say Mass for our 6th graders who were on a nature retreat. The first order of business was to determine where to have it. The first stop was at the outdoor chapel (I knew I should have worn boots and black pants already ready for the wash machine!) but though the altar had a covering on it, the seats were wet – the kids were wet too – but MY seat was wet so we ixnayed that idea.

Mass was held in one of the assembly rooms. The altar was as big as a cargo ship but serviceable. The kids from four schools came and sat on the concrete floor in front of the altar. I must say it was a very well behave group of sixth graders.

Having a more relaxed atmosphere we were able to do some things that are prohibitive at a Sunday Mass. As I dressed I explained to the young folk what the different articles of vestments were for. It took a little encouragement but they sang and made the responses. It was a fine Mass in not so perfect conditions.

After there was the the obligatory bon fire at which the horrible jokes came out. “Doctor! Doctor! I’ve been having terrible dreams!” He said, “Tell me what you dreamt and I tell you what it meant.” “Last night I dreamed that I was Wigwam, and the night before that I dreamed I was a Teepee.” “I know what your problem is,” said the doctor, “You’re just two tents!”

Thanks for offering Mass for the students. Considering that the culture has declared "war" on the souls of our youth, a WWII Mass kit could not have been a more appropriate "weapon" to defend them.

Father - you have no idea of the memories you brought back.I met my wife of 25 years on a retreat at Camp. Search 43 was "my" retreat. Those of us there are about 50 years old or so now. I still love my memories of the camp and all those who came to a closer relationship with our Lord.

I have chaperoned several times at youth camps for our Diocese. It was so much fun! We were in the wilderness at Blue Lake, and each group of youth was chaperoned in a cabin.

My girls got the idea they would like to play a trick on the cabin next door, so they went out in the dark and scratched on the logs of the cabin, trying to sound like a bear. One girl knocked the garbage tin around, just like a bear would have done. It worked! The neighbouring girls and their chaperone inside the cabin were scared out of their wits!

We had a good laugh, but paid the price the next day when the other chaperone snubbed us.

Father: I wondered how long it might be before you were asked to say a Mass at Camp Christopher...being that you are relatively close by.

My family and I attend August family camp and have done so the past 11 years. It is mini-reunion each year with all those we regularly camp with...some as far as Maryland. The masses are what we like to call "kumbuya" masses as they continue to use songs we sang growing up in the '70s. This year our 17-year old daughter will be a junior counselor. We love camp and believe Camp Christopher is one of the diocese's treasures.

Thank you for attending the 6th grader's ecology camp last week. All I've heard about all weekend was stories about mice in cabins and how "cool" Fr. Valencheck was prior to Mass - slapping the beams in the mess hall, slopping through the mud, etc.

One questions - did the homily include a food reference? I know that this past Sunday's did!

Keep up the good work!