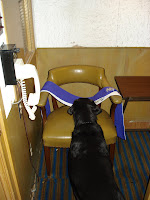 What do you expect when you go into a confessional? It is interesting to hear people who have come out of what they interpret as “a really good confession” describing what made it such a positive experience for them. The problem in listening to try to discern what might be helpful for me to know as a confessor is that they are often opposites. One person might say, “The priest was so kind. He listened and gave me penance without making me feel worse about what I had done.” But there is also, “The priest kind of kicked me in the posterior and told me that I had to stop doing what I was doing and take control of my life! I really needed someone to kick me.”

I take the general tact of being a lion in the pulpit but a lamb in the confessional. This stems primarily from a guy I talked to my first year at the University of Akron. He was a bit older than I and somehow we got on the topic of confession. He told me about going to the sacrament when he got home from serving in the military and thought he would make a clean slate of it by confessing to the priest. I guess the priest was scandalized by whatever it was the man said, told him that he that he was to identify himself as Mr. X and that he was to report back next week for a continuation of his haranguing. He never went back to church again. 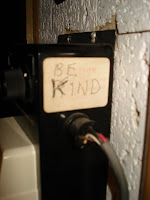 ived at St. Sebastian I saw this scribbled on the side of the hearing impaired phone in the confessional. I image a priest sitting there with a pen in his hand, head resting against the side of the confessional box finding himself becoming frustrated with what was being said and scribbling this little note to himself, “Be kind.” It is easy to forget why you are there. You are nothing more than an instrument of God’s mercy. It is not yours to judge. You may need to clarify something or at times challenge someone in their behavior (or at least ask them to explore it) but except in some rare incidents (such as the person not the least bit remorseful rendering the confession null anyway) the priest is there to convey the gift that he was given freely to pass on – forgiveness.

So it is a long day, confessions are going long, and I grow tired and annoyed I do my best to err toward being too kind rather than gruff. Sometimes I worry about seeming soft on sin or perhaps I do not give that kick in the posterior that some of my confessees really need. But we trudge along, some of us being too kind, some of us being too tough – but ultimately it is the Holy Spirit who works in spite of us priests and I pray that He act where I fail to perceive that more attention or action is needed with those who brave the confessional line to tell God (not me! – though I do represent the community) they are sorry.

That is why there is a priest for everyone, not an everyone’s priest.
Consider taking the poll in the right hand column. Thanks!
Posted by Fr. V at 10:42:00 AM

Great topic. But it's a tough one from this end, too, because sometimes we need different things. I've stood in line sweating and shaking thinking about what I was about to confess, not even knowing how to SAY it...and the priest didn't even bat an eye. (Not that I could see, I was behind the screen.) And then the penance was all about trusting God and remembering His mercy. Exactly what I needed.

My best confessions were quite uncomfortable because the priest posed a question for clarification, and of course....I couldn't lie. And he said, "What are you going to do about that?" to my response. Ball in my court. Take responsibility.

It was hard, but exactly what I needed.

Two very different experiences, equally as wonderful in the end.

I need more confessors who kick me in the pants. :-)

That's just me. Maybe we should wear stickers:

"This one needs a kick in the butt."

Regarding your poll, we can never figure out penances and how they are applied.
For example, we usually go to the same priest because it is the closest. Our daughter pointed out that she couldn't figure out why he gave her, all of a sudden, a heavy pennance (saying the rosary) when all the other times, it has been reflect on the Gospel or reading for the day. She almost had a "freak out" moment thinking she had commited a graver sin. I said maybe he was trying to bring her into a deeper devotion...but the next month....reflect on the reading. So we left it alone and realized, we do not understand how they decide what is to be given out.

I have been going to the same confessor for years. When he was in Rome for a few years, I didn't go nearly as often, and when he returned, it took me a long time to get back into the swing of confession.

Now I notice that when I go, my confessor can give me more guidence that pertains to my life, because he knows me; plus he's upping the penance bar a little bit at a time, which I also appreciate.

Also, the more I go, the more aware of my own sins I am on a daily basis, which really increases my desire for the confessional, and when it's more than a month or so I start to feel more and more distant from God. It's a really powerful phenomenon.

Whenever I was lucky enough to make it into the confessional despite the town's serial confessER (my sympathy for confessORs grows by leaps and bounds) sucking up the entire time allotted in a certain parish, I'd always hear the same penance. That's no exaggeration. I began to feel I could confess anything--anything!--and it would harvest the same penance: "Try to do someone some good this week, and now, make a good Act of Contrition." (What the heck was he telling Ms. Serial Sinner, then??)

Son shared with me some of what his penance was after he made a huge years-deferred confession. His priest told him to make amends directly if possible via making things right in various ways, and where not possible, to truly seek ways to bless others with alms or other giving, and that it should not be a giving out of his abundance, ever. Well, I can't reveal exactly what it all was and was due to, but his penance was to be truly restorative to all (including him) -- something he couldn't possibly do in a day; it would take months, and it would change him for the better along the way, for good. Unfortunately, because he hasn't made good on a few things, he withholds himself from receiving the Lord. But he made His Easter duty after many years without!

It's all but impossible to think of Christ hearing our confession and speaking through you, so although we call you priests "Father," perhaps in the confessional we are most in need of "Brother."

After a dearth of pictures of your dog, we get him two days in a row--thanks! (P.S. I wonder how "Sebastian" voted in your penance poll.)

Dear Father, This comment is off the topic of penances but within the general topic of confession. Many years ago, I read an article in Catholic Digest about the "symbolism" involved in confessing behind the screen instead of being seated in a reconciliation room. The article pointed out that when we enter the confessional, it is dark, cramped and somewhat airless. We kneel in the darkness, waiting penitently. Suddenly, the window opens and light shines upon us. We confess our sins, hear the words of absolution and then stand up. We open the door and move out into a spacious, airy and bright church. We have been released from the darkness and imprisonment of our sins, to walk in the light of Christ.

Father,
I guess it's confidential which category of penance your dog received?

Once after a confessing sin “X” and receiving absolution, the priest paused, smiled sweetly, looked down his nose and said, “No more (sin ‘X’).” It felt like he had taken a razor and nicked me in the heart. That was 12 years ago, and I still remember the feeling. His tone that seemed to say, “You know better” was more powerful that any butt kicking he could have given me.

The church I go to has two FSSP priests, and one sits in the confessional while the other says Mass. One has a real gift as a confessor - his lineups are huge - he is well known as a wonderful confessor. He gives great spiritual advice; never hurries anyone, and walks you through your memory of recent sins you may have forgotten. He always asks about your prayer life, too.

Another thing he does - he asks you to confess at least one mortal sin from your past, even though you have already done so, and it has already been forgiven. He says it helps to make you humble.

He is a saint. At least, we all think so.

Best penance? When I confesses something have to do with my children and was asked to say Psalm 127. I went to the chapel, knelt, opened up my breviary and prayed:

"Truly sons are a gift from the Lord"

I laughed at how on the spot it was. Healing, instructive, specific, and spiritually rich. I still contemplate that penance.