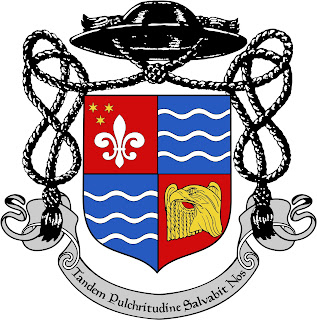 A couple of weeks ago I made mention that Catholic clergy and institutions have a right, under certain conditions, to have a coat of arms.  St. Sebastian parish has a coat of arms that was designed almost at the founding of the parish.  Most priests haven't bothered with (or maybe know about) a clergy coat of arms, but I thought they were fascinating since I was a little kid and of course I had mine designed.  Why not?

So someone asked me to explain mine so here we go:

In the upper right and lower left hand quadrants are blue fields with squiggly white lines.  These are taken directly from the coat of arms of our major seminary, which most people call St. Mary Seminary but whose full title is St. Mary, Our Lady of the Lake Seminary.  The lake in question is Lake Erie.  So, at least in part, this is an homage to my seminary.  But my family has a lot of ties to bodies of water: all of my grandparents came over "on the boat," my Dad served on a destroyer escort in World War II, we grew up in Barberton who has Lake Ann as its defining feature, and we just also enjoyed lots of time on the water as a family. 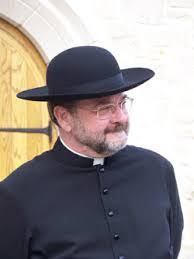 In the upper lefthand corner is a fleur-de-li which is an artistic representation of a lily, most commonly associated with the Blessed Virgin Mary who I ask to guide me.  It is also associated with Joan of Arc on whose feast day I was ordained.  The three stars in the upper left hand corner were a suggested addition by Fr. Micheal B. Smith and come from the Slovenian flag, the country from which all my grandparents come.

The lower right is an eagle most associated with St. John the Evangelist.  This is a copy of a medley that was placed around my neck when I was born, the only difference being that the original had a banner on it that said, "St. John."  St. John is also the patron of the Diocese of Cleveland.

The hat is a galero, a traditional hat worn by clergy (though rarely seen nowadays on anybody's head.)  Clergy may not have helmets or other things so he gets this hat in black and with only two tassels.  (Of course, as a clergyman changes rank, the hat color changes and the number of tassels increase.)
Posted by Fr. V at 7:37:00 AM

Good for you, Father! The use of heraldry is a beautiful and symbolic way of instantly recognizing a person or place. Every parish I've served in is in possession of arms now.

I think Church heraldry is fascinating. If you think so too, check out a book called "The Church Visible", by James-Charles Noonan. It was published in 1996 but I think you can still find it. Great explanations and photos too.

May I ask, who did you work with to design your arms? I’ve been looking around...

Thanks Fr. G and good work to you!

Fr. Tim, Fleur-de-li Designs cleaned it up for me and made it printable - but I designed my own.

You didn't include the translation of your latin motto. I'm guessing it's "Beauty, also, will save us."