SO WHAT YOU ARE SAYING IS: NO MORE CASUAL SEX UNLESS I GRANT YOU ABORTIONS. OKAY. DEAL. 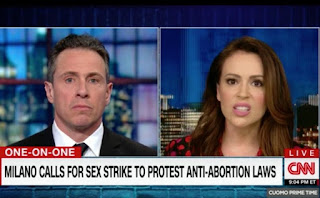 How do I say this?

I agree with the article that I was in the Akron Beacon Journal this past week - but I don’t think I agree with it for the reason that the person putting it forth would want.  But I think I am happy.  In a pollyanna way perhaps.

Alyssa Milano, protesting the more restrictive abortion laws (or, in my way of seeing things, the more life protecting laws) asked women across the nation to stop having sex as long as this trend toward life continues. 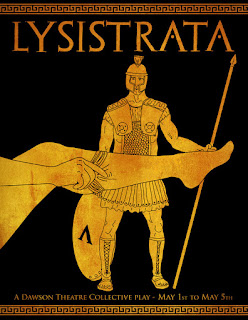 Yes.  More power to you.

I think Lysistrata would be proud.  In the Greek comedy, Lysistrata got all the women together to withhold favors from their husbands until they gave in to their demands.  In the current case, it is asked that casual sex that could result in a child being conceived be refused unless a child is actually wanted and hopefully between two committed adults.  (Hello definition of chastity.)  I am flabbergasted.  Though she sees it as a punishment and incentive (particularly to men) to make abortions more greatly available, it is a salvo for the dignity and power of sex, the respect women should have for themselves, the responsibility men should have for families and the life and dignity that should be afforded to every human person.  (I fail to see how this punishes pro-life women who, quite frankly, are already trying to live this way as a virtue.)

In Humane Vitae, Pope Paul VI said that he feared that if contraception (and let’s be honest, abortions are in high use where contraception has failed) were of common use, casual sex would greatly increase, women would be used as objects, and men would abandon their responsibilities.  What better way to correct that than to say, “I will not abuse my body, my dignity or risk conceiving an innocent life into being unless I am darn ready and want to do so.”

Therefore, the woman must use contraception, backed up by abortion, in order for the man of her choice to enter into a relationship with her.

The bodily autonomy which Ms. Milano seeks for women is that they will agree to (and have, if needed) an abortion in order to keep the man.

For a woman to be in a romantic relationship with a man and NOT have sex with him as part of the relationship is a foreign concept to Ms. Milano. We older folk used to call such an arrangement “courtship,” or at least, “dating.”

Young people these days don’t know how to date, let alone enter into a courtship to explore the possibility of marriage.

I think Ms. Milano painted herself into a corner - what a pity (giggle).

Fr Valencheck & Fr Simone - before becoming a Catholic last March, I always felt that it WAS a women's right to choose. After some lively conversations with Fr Simone, some recommended reading material, careful, careful soul searching, and quite a few "aha" God moments, I now realize that I was wrong. I was very fortunate to have a strong, loving 35 year marriage before my husband's passing in 2016. I have now welcomed my #happycelibatelife"! I have no interest in anything other than focusing on the continuing building of my relationship and friendship with God and finding ways to volunteer with organizations that offer alternatives rather than taking the life of an innocent child.

I may not always fully understand your posts or who you're quoting, etc., but I think I now know right from wrong.