Can you believe that put that monstrosity in you parish church and called it art???

(This happens often enough that I bet most people could think that this statement refers to their situation.) 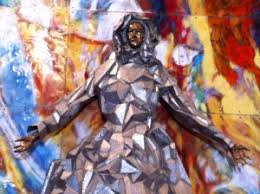 So there is art, and then there is a subcategory of art known as liturgical art.  Liturgical art is used largely during the liturgy or in church buildings (or as part of church buildings) whose purpose is to lead the viewer more deeply into the truths and mysteries of the faith.  It is the reason churches are called catechisms in stone.  It is why the church, particularly during the counter reformation invested so heavily in the arts.  There are some things that are so much easier to see and be moved by (Beauty) than it is to be taught by dissertations (Truth).

There are some pieces of art that, while they may be worthy of a museum, are not worthy of our worship spaces - and now that I think about it, there is A LOT that is not worthy of either. 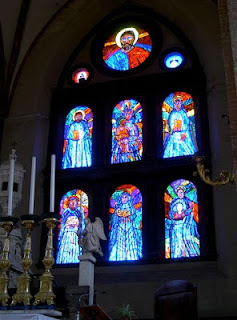 Pieces of “art” that are not clear or beautiful are not (IMHO) pieces of liturgical art.  Pieces that need way too much explanation, that attempts to “mean” way too many things to way too many people, that express the artist’s angst more than a theological truth, that are not beautiful or moving, or just leave the typical viewer scratching their collective heads and wondering “what the get out?” is not liturgical art.

I have encountered all of these.  Some of them are still worthy as a piece of art perhaps, but not for Church.  Part of the very purpose of the art is to strike someone so deeply that they want to spend time with it - hopefully at first glance - to be drawn in - to be made curious - to be moved to think about spiritual truths and not immediately about how much they dislike it.  Some well meaning artist may say, “But I am expanding their ideas of art!” may be doing a good job in that respect, but they are not doing a good job at liturgical art.  They run the risk of pushing away souls rather than attracting them.
Posted by Fr. V at 8:57:00 AM

Some years and a couple of pastors ago, a parishioner made a gift of a modernistic, expensive, free-form water fountain to our parish, intending it to be used in the church. Bearing in mind our church is quite religiously ornate, stunning beautiful, and built in 1905.

Father decided to place it in the sanctuary, on the St. Joseph side, near to where the priest's chair is currently placed.

It remained there for a year or two, gurgling away, jarringly mismatched to the ornate, traditional architecture and design of our church. Anyone who was close enough to hear it bubbling had sudden and repeated urges to visit the restroom.

Father finally decided enough was enough, and the fountain disappeared. Much to the relief of the parishioners, and probably the priests as well. Pretty much *all* of us were very happy about it.

As I think Coco Chanel put it, sometimes less is more!

God bless you and Fr. Simone and all our good cluster neighbors at St. Sebastian - Sue, OFS

I think I remember that. I wonder what happened to it? I hate to say that I hated it but . . .

We all (priests) do things that seem like a good (and sometimes expensive) idea only later to learn that we made a huge mistake.

Hopefully Father donated it to someone who appreciated it more than we! Or perhaps it ended up in the same unknown place where our awesome statue of St. Michael (hovering menacingly over the main vestibule with a sword in his hand) went when the church was "renovated" back in the 60s. I remember being a little scared of the statue. My dad said it was for people who were late for Mass or who left after Communion instead of waiting for the blessing! Peace and all good - Sue, OFS