FRIDAY POTPOURRI: HISTORY OF THE RECTORY CHAPTER THE FOURTH: TAMING THE KITCHEN

My family came over to help me break in the new house.  Mother and Father having passed, the task was left to my sister Mickie, my cousin Bernadette, and my Aunt Mary.  All setting off to explore and snoop we became separated from each other.  The house is large but not that large.  But the privacy walls erected in hallways made parts of the house isolated and the floor plan confusing.  We became sufficiently lost in the unfamiliar surroundings and had to use cell phones to be brought together.  The reunion was reminiscent of characters in a haunted house movie finally coming together after having gone their separate ways for some inexplicable reason.  Together after our adventures, it was decided that it was time to break in the kitchen.

My family considers this room one of the most important to a priest.  When I was first ordained my cousin Bernie bought me a cookbook with the admonition, “You are now becoming a public figure.  The only place people cannot tell you what to do is in the bedroom and in the kitchen.  Learn how to cook.” 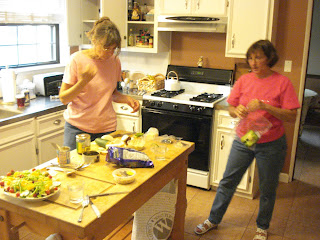 In general people either love this kitchen or they hate it.  There is very little middle ground.  It is large, high ceilinged with tile floors, and a butcher block table right in the middle.  I am somewhat naive when it comes to kitchens but was rather taken in with its dual microwaves.  The assembled family fell on the positive side concerning the kitchen.

It is located in what is called the service corridor of the house.  This section of the house also contains the live-in’s bedrooms, which had been transformed into offices, the live-in’s living room now serving as the breakfast and lunch room, and a private staircase which givES access to the priest’s quarters upstairs and the  laundry room, boiler room and storage/pantry downstairs.

The first job was simply trying to figure where everything was.  Here I was gently pushed aside as the new order was taking shape.  “Spatulas!  These belong by the oven!  Knives!  These belong by the butcher’s table!  These pots and pans need to be handy!  These can go under the counter!”  And so the kitchen quickly took shape and my relatives did it with such authority that I have been afraid to change it to this very day.
Posted by Fr. V at 5:45:00 AM

The kitchen is great in size but there is too much junk on the counter tops, taking up valuable space. They did a good job of deciding where to put everything. It is a fun kitchen to work in; the team always has a good time making dinner there.