Although we don’t know the exact day, this year we are celebrating the 185th anniversary of the first Mass celebrated within the city limits of the city of Akron.  That is not to say that there wasn’t perhaps a Mass celebrated in the area before this time but that this is the first known and recorded Mass.

In 1808 all of Ohio was part of the Diocese of Kentucky where Bishop Benedict Joseph Flaget was the first bishop.  He had about 10 priests to serve this vast area.  Because of the growth of Catholics in Ohio, Dominican Father Edward D. Ferwick was named the first Bishop of the newly established Diocese of Cincinatti.  He undoubtedly sent priests to the area to minister.  They would travel from Canton through the woods and stay in people’s houses or even, from time to time, out in the open.  Mass was celebrated in taverns, log cabins, in public buildings, and non-Catholic churches.  Save for these visits, residents of Akron would have to travel to Canton, Doylestown or Cleveland for the sacraments. 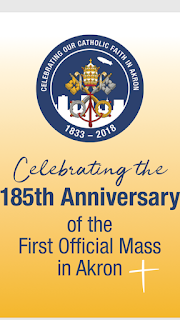 Akron grew owing to the canal and this brought many Catholics to the area.  1833 is the year that we know for sure that a Mass was celebrated within the Akron city limits. The Rev. John Martin Henni who would later become the Archbishop of Milwaukee, came to say Mass in the log cabin of James McAllister, a local contractor.  This is the anniversary that we are celebrating.

The pastor in Doylestown, seeing that the number of Catholics was growing, purchased separate sacramental register books to record baptisms, confirmations and wedding taking place in Akron beginning in 1937.  Bishop Purcell, bishop of Cincinnati, visited the McAllister home again that home again that year and spoke to area residents about founding a parish that would serve the Akron and Cuyahoga Falls area and so the missionary parish of St. Vincent de Paul was founded, preceding the establishment of the Diocese of Cleveland by 10 years.

A Mass celebrating this history will take place at St. Vincent de Paul Parish (the mother church of Akron) on Thursday, September 27th at 7PM and you are invited to attend.

Most of the above information comes from Murray Powers’ book, “History of the Catholic Church in Summit County from Origin through ’76"
Posted by Fr. V at 8:08:00 AM

Thank you for the *very* interesting history on our Catholic Church here in Akron. I think it is fascinating. Where would we be without our faithful Catholic community of that time, building beautiful churches, schools, and hospitals, instilling the Faith in the locals and immigrants, inspiring their children to enter the priesthood and religious orders, and creating our heritage - just as we are doing right now! We need to remember that, especially when so many want to give up on our beloved Church.

When I was on parish council several years ago in Fr. Schindler's time, he commented that St. Bernard would cost over $24 million dollars to recreate, and if it burned down today, we could never hope to replace it. And yet, it was fully paid for before the first Mass was celebrated there 113 years ago, due to the sacrifices and labor of the good German and Austrian parishioners (and even a donation from the King of Bavaria!)

I cannot make the Mass at St. Vincent (our Franciscan formation class is nearly ready to Profess on October 6, and I am part of the team helping them to prepare that night), but my husband will be in the K of C honor guard. I told him I want to hear all about it!

Very warmest blessings to you and all our cluster neighbors at St. Sebastian and St. Vincent - Susan, OFS