FRIDAY POTPOURRI: HISTORY OF THE RECTORY: THE FIRST BOARDER CONTINUED 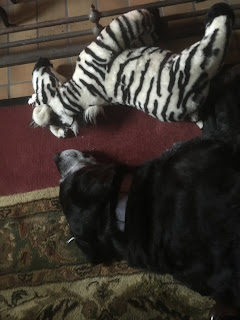 The dog came for his interview the following Monday morning.  He looked like a black lab save that he was a little larger, hairier, and with a longer snout.  And had a heart the size of a full moon.  On one hand this was very endearing.  On the other it made him go into an anxiety fit when it was apparent his owners were leaving without him.  He threw himself against the door with the fervor of a man who was wrongly accused of a crime being thrown into solitary confinement for the rest of his life.  The old curtains on the door windows were shredded.  It was time to replace them anyway.

It took the better part of a day to coax the dog out of a deep depression.  Not even food tempted him and at dinner I had to hold morsels of dog food up to his snout for him to mindlessly eat as he stared out the backdoor.  At some point however something clicked and he simply decided to make the best of a stressful situation.  I tried not to form a bond with the dog.  What if the staff would say that it was too difficult to have a dog in the house?  But he was extremely affectionate and turned on the charm full steam and within hours I was in love.

So we move into his first night at the rectory.  Some dog book warned against ever letting a dog sleep in your bed.  “You will come home one day and all your bedding will be chewed up!” it warned with great foreboding.  When I went to bed, the dog came rested his chin on the edge of the mattress and looked at me with his big, black, watery eyes.  I was strong however.  If we were going to do this we were going to do it right.  Besides, I had never slept with any living being in my bed and was not sure that I could start sharing it now. 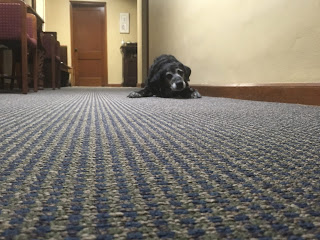 The dog decided to settle for sleeping under my bed which was not a good move since he was a large dog.  As he crawled under or tried to turn over it was like being in a commercial airplane with a little kid kicking the back of my seat.  A couple of days later he settling on sleeping in the very back of the closet where there was a little private hideaway formed by my hanging cassocks.

Over the week, the dog, whose name was Roomie, and I became inseparable.  He was a constantly glued to my side whether I was going into the office, my room, down in the basement, or anywhere for that matter.  I soon discovered that walking him with a leash was rather redundant.  Save for the occasional squirrel, he was not going anywhere without me, though I drew the line at the bathroom.

He did not come with any toys and so I dug around in one of my trunks and found old blue racquetball balls.  After dinner when the staff had gone home, we would go to one of the long hallways in the house and I would chuck the ball with the dog in hot pursuit.  Being that the ball had a lot of spring in it, it would bounce in any number of unpredictable directions and Roomie would do his best to try to subdue the thing before bringing it back for another go.  It was quickly apparent that the dog had no athletic prowess at all (and would never develop it.)  But he did have a lot of gumption and so kept at it. 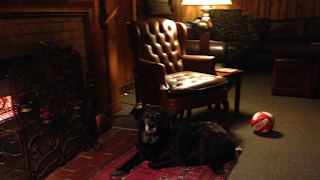 The week passed quickly and the owners of the dog returned to take the dog home for the weekend and wait for a decision.  Everyone had the intervening couple of days of the weekend to decide if a dog, let alone this dog, would be a good fit for the parish.

By Tuesday morning the dog was permanently installed in the house, the staff later informing me that they knew the dog was going to be a resident fifteen minutes after his arrival.  They saw the bond fixed and made permanent that first day.
Posted by Fr. V at 6:07:00 AM

What a good boy! And Sebastian has become a real gentleman, a good rectory dog. BTW - I think "Sebastian" is a far better name than "Roomie", which makes him sound like a beer buddy. They have very different personalities, but I love Sebastian and Chester. They are very endearing. Susan, OFS

What a heartwarming story, Father V! I had tears in my eyes reading about his first few hours at his new home. Thanks for sharing this...

To paraphrase Benjamin Franklin: 'Dogs are proof that God loves us and wants us to be happy.'

After all, DOG spelled backwards is...