FRIDAY POTPOURRI: PARISH HISTORY: NOT QUITE THE END OF AN ERA

It is a busy end of the year!  Apologies for no posts this week!

The Second Vatican Council closes and in the next city over, a baby named John Anthony Valencheck was born at Barberton Citizen’s Hospital.  Forty three years later he would become the fifth pastor of St. Sebastian. 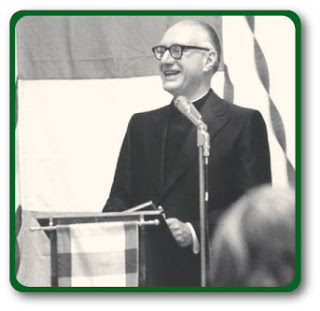 Forty years had passed since the founding of the parish.  It had weathered many storms and stood up against crippling debt, one of the worst economic downturns in history, a word war, and a huge reduction in its boundaries, but it still stood out as a shining example of the very best in Catholic parishes.  Monsignor Zwisler was the mighty captain at the wheel for the entirety of those four decades, but now, at 80 years of age, it was time to retire and The Rev. Charles Byrider to be named the second pastor.

It is generally thought that this year marked the beginning of the Byrider era and in many ways it did.  But the influence of Monsignor Zwisler was far from over.  He would continue to live at the parish and his shadow of influence would continue.

l965, huh, Father? Don't feel bad. I was already a frosh at BGSU and wondering what the future of the Church was going to be and soon the country was torn apart by the war in Vietnam where I lost a best buddy, blown to bits by a landmine. Not a fun time in that era for those not around. Odd, how the Vietnam War is long forgotten by the young and the Church is still in turmoil over the after-math of the ill-conceived Vatican 11.

Dick, thank you for your service and sacrifice for this great country. May we never forget. What is not so odd is that the Church that Jesus established still survives 2000 plus years later. Beauty, truth, and love is not ill-conceived like war, poverty, and abortion in a culture of death. We are blessed by people who believed and hoped in love and life. Read about the lives of the saints, and St. John Paul II for beginners. Vatican II is just getting off the ground, awesome!