In last week's installment, Father Zwisler was pitching the bishop for an additional parochial vicar.  Apparently his wish was granted but the priest was not the “efficient and zealous” model that he desired.  The young priests at the parish begged the diocese to grant them some relief.  In  a report dated September 13th, the chancellor wrote of the priest’s concerns.  The most serious part of the letter explains, “He puts the priests on a schedule which regulates every minute of the day; he has absolutely no sense of humor; he seems offended if the assistants are shown any signs of popularity by anyone; but there are no serious charges. 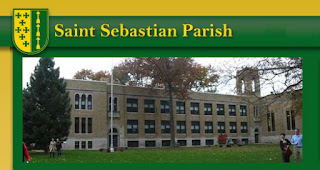 “My own observation and opinion is that something ought to be done.”  The suggestion was to reassign the priests who were otherwise good men before the problem became serious.  “Would it be wise to appoint a couple of older men to St. Sebastian’s?”

Apparently the Bishop agreed.  On September 28th, one of the young priests was reassigned and replaced with a more experienced priest.  The other priest would leave the following year.
Posted by Fr. V at 6:21:00 AM