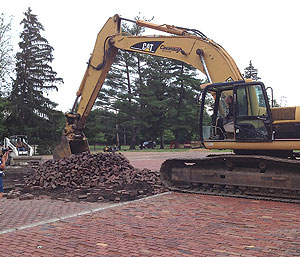 The paved streets in Akron at the time were largely done so in brick as exemplified by Mull Avenue today.  When roads were laid there were inevitably bricks left over and Father Zwisler would buy the bricks from the city and have them delivered to the parish.  The surface of the original parking lot was cinders that the janitor would take from the incinerator, spreading them on the field.  It was on top of this that the bricks were placed in order to create a parking surface.  Eventually this surface would take up over an acre.

The lot had a certain charm and looms heavily when recalling the lore of the parish.  “I heard it on the brick parking lot,” came to be to a St. Sebastianite what others would mean when they said, “I heard it through the grapevine.”

The lot was not square and though useful, because of its odd shape, it did not lend itself to sensible parking patterns.  And while charming from ground level, a view from the sky showed a patchwork of bricks giving testimony to the different roads from which they came.  There were approximately eight different road bricks to be found in the lot in colors ranging from yellow to dark red.  But its irregularities aside, it served the parish for almost three quarters of a century requiring virtually no structural maintenance.

At some point, a parcel of land was purchased directly across the street from the parking lot and a small house erected on the corner of Elmdale and Orlando.  The house, served as the residence of the parish maintenance man.  It is easily recognizable by looking at its driveway.  As of 2018, it was still paved in the same bricks that once made up the brick surface of the brick parking lot.

The lot was also used as a playground for the school.  Many an adult man proudly recalled “losing a lot of skin off of my knees on those bricks when I went to school here.”  At some point, lighting was added.  To accomplish this, underground wires were run across the lot and then covered over by a twelve inch wide strip of concrete.  The line made a handy divider between the boy’s side and the girl’s side of the play ground.  Micki Trenta reminisces about how the girls used to play jacks on the cement strip, the uneven nature of the bricks it making too difficult a surface on which to play.
Posted by Fr. V at 5:58:00 AM