MONDAY DIARY: ALMOST EXCRUCIATINGLY TRUE STORIES: NO ROOM FOR THE LIKES OF YOU 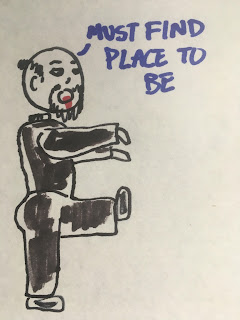 I've heard numerous horror stories of people complaining about how difficult it is to live in their homes when they are having major work done on it such as having a kitchen or bathroom redone, a common in our neighborhood where the housing stock tends to be vintage.  I will admit to thinking that they are a bit overdramatic.  I was wrong, WRONG, WRONG!

There were a number of things that needed to be done to this 80 year old rectory.  The target was to have it done before one parochial vicar cycled out and the new one moved in.  Of course, the contractors all arrived late and on the same day.

So, while Fr. Simone was moving in, the painters (it's been a long time since parts of the house have been painted,) the carpet cleaners (they haven't been cleaned since before I moved here,) and the plasterers (for both water damage and dry rot) all arrived to work at the same time.  This made finding a place to be for hours on end very difficult.  No matter what room you were in (including THAT one,) someone was occupying or needing to occupy it in order to work.

At one point I thought I found a closet sized room to "be" in, but I was quickly released of that illusion. 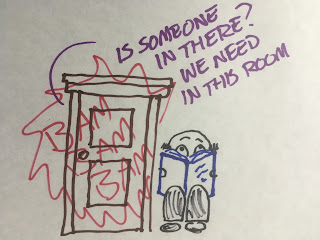 It is that time of year to clean and paint the school so that was out.  Somebody was using the gym (somebody is ALWAYS using the gym) and so I thought I would go sit in the choir loft: 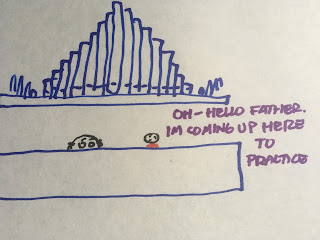 So obviously that didn't work out.  It was 90 degrees out but I found a bench under a tree in one of our gardens. 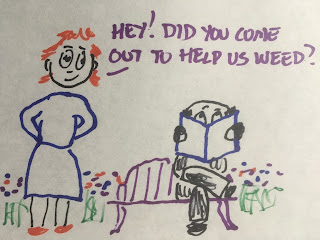 I promise not to doubt anyone anymore if they complain about the difficulty of living in a house that is being worked on. 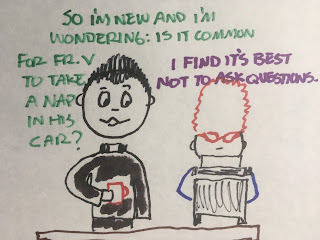 Why didn't you just go down to the rec room & turn off all the lights? Rec rooms are an excellent place to hide, er, meditate. Just make sure you take the dog or he'll totally lead them to you. Trust me.

Not when they are cleaning the carpeting down there . . .