IF IT ISN'T TRUE IT SHOULD BE

Once I was at some museum show (was it a Vatican tour?) and they displayed a pair of sandals that were "found" in a cabinet wrapped in very expensive clothe somewhere in the Vatican and for some reason they were lead to believe that they were the sandals of Jesus, though they said so very cautiously.  They use the same caution with proclaiming Peter's bones to actually be Peter's bones.  They are difficult concepts around which to wrap your mind.  They seem almost too good to be true.  So we say, "These are Jesus' sandals" through a strained smile and then raise our eyebrows and occasionally one shoulder.

Either way, they are interesting items to contemplate which leads to one of my favorites sayings from my favorite historian, Fr. Thomas Tift, "If it isn't true, it should be."

The following is more believable than the authenticity of Jesus's sandals but I hold the same caution.  As some of you may know, there is a new Catholic school opening up, the Julie Billiart School of St. Sebastian, Akron.  It is for children who learn differently than a typical student.  It is opening in a former Methodist Church about two blocks from the main parish campus.  There is a chapel attached to the school and I am tasked with making it "Catholic."  We need stuff and I am trying to do it without spending much funding as there are so many needs in opening a new school.  So I put out a call for Stations of the Cross, candle sticks, altar linens, statues, the whole shebang, anything someone might have stored in a box or attic. 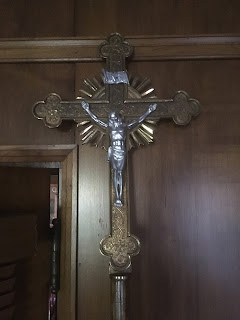 We have received some things: a Missal, chalice, sanctuary lamp, tabernacle, and now a processional cross from Fr. Pfeiffer's Father.  This is a picture of it.

Here is the story:  Dad Pfeiffer received it in 2008 from a friend who was a Civil War reenactor.  He in turn received it from his first sergeant who was not Catholic and who obtained it from a man who said it was used in the Civil War for Catholic ceremonies.  That man too was non-Catholic.

Apparently it was in that man's father's attic for years as it belonged to his great grandfather who was Catholic and a Civil War soldier.  If true, not only is it cool, how fascinating that it was held since the 1860s by non-Catholics and now is returned to use in the Catholic Church to be used in a former non-Catholic chapel for Catholic services.  If it isn't true, it should be.

Just for full disclosure, Dad Pfeiffer replaced the pole and the corpus that was badly damaged.
Posted by Fr. V at 5:43:00 AM

Analogous to those in Russia who stripped churches of icons and took them home for safekeeping. An icon of the Theotokos was returned in the 90s, to St Isaacs cathedral as it was deemed safe to do so.

How good of the people to preserve the procession cross. Thete must be many things to reclaim.

So what you're saying here is, if we have Jesus' sandals in our posession, please consider donating them to the new school?