FRIDAY POTPOURRI: THE HISTORY OF ST. SEBASTIAN PARISH: PART I: INSTALLMENT I

Today we begin a new series on Friday Potpourri.  Inspired by current events in Schneider Park and the upcoming nonagintennial (90th) anniversary of the Parish of St. Sebastian, this space will be a history of the Parish beginning with a general understanding of the area and its Catholic roots before the parish was founded.  If you find anything that is incorrect or could be expanded upon, please let me know!  I want to have this project finished for next year.  Thanks!

Today's installment was made possible with the help of the St. Vincent website. 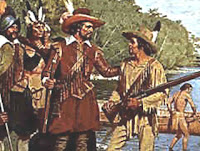 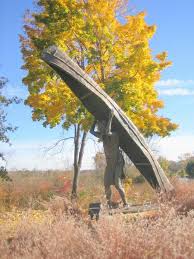 There was something peculiar about the man walking down the trail.  He was not like the men that had walked this trail for hundreds of years.  His clothes were different, his face was different, and his language was different.  His name was Etienne Brule and he was the first known non-native American man to take the trek down the most historic ten mile trail in American History.  This expedition took place sometime just before 1615, historically just a fraction of a moment ago.  The Indian portage, known now as Portage Path and which today marks the eastern limit of our parish boundaries, was an important crossing for the Native Americans between the Cuyahoga and Tuscarawas rivers and later became the impetus for the growth of Pennsylvania and the Ohio Valley.  It was possible to travel from the Great Lakes all the way down to the Gulf of Mexico except for this small trek on which they would have to portage their canoes and gear.  Today, large bronze arrowheads roughly mark out the location of this historic path along Portage Path Road. 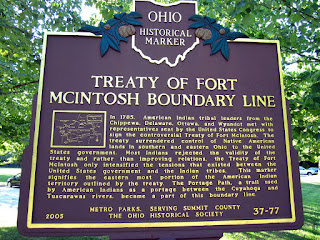 With the signing of the McIntosh Treaty and a few years later the Treaty of Greenville, Portage Path became part of the boundary between the United States and the Indian Nations of the Northwest.  This boundary held from about 1785 to 1805, a mere 123 years before the founding of the Parish of Saint Sebastian.  The City of Akron, founded by Simon Perkins, would be founded in 1825.

The first Catholic Church in the area was St. Vincent de Paul established in 1837 as a missionary church.  At the time this area would have been part of the diocese of Cincinnati, so the founding of St. Vincent, our mother parish, predates the Diocese of Cleveland by ten years.  The first record of a Catholic priest visiting Akron was in 1833.  The Rev. John Martin Henni who would later become the Archbishop of Milwaukee, came to say Mass in the log cabin of James McAllister, a local contractor.  From then, when a priest was able to make it to the area, Mass was held in the old Dunn home on Green Street and other private residences of the Catholics that lived in the area. 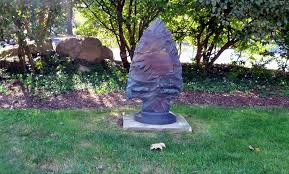 The first permanent Catholic ecclesial structure in Akron was begun in 1844 (the year the first telegraph is sent and the University of Notre Dame received its charter.)  It was made out of timber cut and hauled by members of the parish.  Completed in 1845 (the year Florida and Texas became states) the frame structure located on Green Street served as the church for the parish until the current church was constructed. 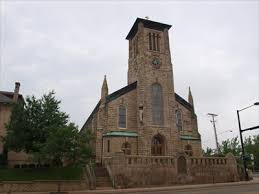 The foundation for the structure on West Market Street, with which we are familiar today, was laid February 18th, 1864, a year before the Civil war was over.  Building was then suspended most probably due to a shortage of material and/or manpower owing to the war.   It is fascinating to ponder that the foundation of the building we drive by so quickly today was also seen by Civil War soldiers, who, during the war were probably fed on oats produced in Akron, were now coming home, either walking or riding on horseback, passing that stone foundation. Construction resumed in 1866 and finally reached its completion in 1867.
Posted by Fr. V at 6:45:00 AM

Really fascinating history! Thanks for posting!