EVERYTHING OLD IS REINTERPRETED AGAIN. 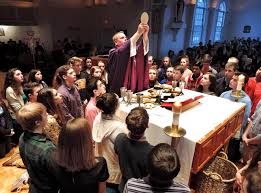 In college I attended a Mass at which the celebrant invited us all to stand around the altar for the consecration.  There were about 30 people in attendance for this weekday Mass.  We came up around the altar and as we stood there, a toddler came over and laid down on his back next to me, wrapped his legs around the ankle of my right foot and began to shake back and forth violently much to his enjoyment, my embarrassment, and the mother’s smile of, “Isn’t he cute?” 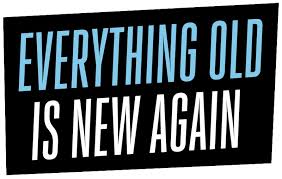 Anyway, that was a fairly common “in” thing to do for a spell.  (Gathering around the altar, not shaking people’s legs.)  I hardly hear about it at all anymore either because it is such old news that it doesn’t make the gossip chain anymore or because it has largely been given up on.

But oddly enough, this is a way of understanding the the use of the much vilified altar rail.  The altar rail is considered an extension of the altar of sacrifice.  That is why almost always, the top of the rail is made out of the same material as the mensa or top of the high altar (and why people should not sit on it, put pamphlets on it, or in general do anything that one wouldn’t do with the altar.)  The faithful who are priests, prophets, and kings by nature of their baptism are called to this extension of the “the Table” as the disciples were gathered around the table of the Last Supper, drawn up to the sanctuary to receive the Body and Blood of Christ from the very table itself.  Understood in this way, unless one troops everybody into the sanctuary to gather around the altar, the laity have actually been pushed back further away from the altar with the removal of the rail in so many of our spaces. 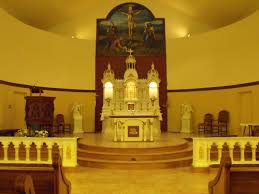 My home pastor used to say, “When everybody gets tired of the way we do Mass now, we will have some new iteration that will look strikingly like the past, but will be entirely new and the people who start it will be innovators.  Then they too will become old school and someone will come by and change that innovation again.”  From architects to laity to clergy; everyone wants everyone to be “more connected” to the Mass.  All of it depends on how one interprets and labels the symbolism.  I look forward to what comes next. . .
Posted by Fr. V at 6:25:00 AM