IN A FALLEN WORLD 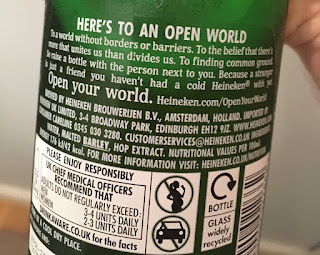 Heineken Beer has an “Open Borders” campaign running on the back of their beer bottles.  I’ve heard a number well meaning speeches by various people talking about how we should focus on what unites us rather than what divides us and that we should rid ourselves of artificial borders and such.  It sounds beautiful.  As a matter of fact, it sounds like heaven.  It is what Jesus calls us to.  “That they may all be one.”  It is His goal that we be one in Him.

But a world without borders?  I am not so sure.


Personally, I am all for national borders.  Think of all the refugees we have in the world.  They are not moving around simply to find a condo with a better view, they are fleeing something.  The conditions under which they are living have become untenable, in fact, many fear for their very lives because of their religion, nationality, politics, or any other number of things that mark them as different.  In a world with borders, they have some place to go where there is some hope for safety. 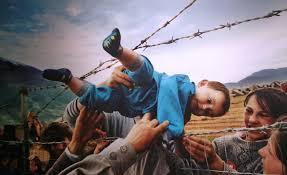 It is easy for a citizen of the United States to dream of a world without borders since most U. S. citizens feel pretty safe.  But human leadership is prone to corruption.  Some Catholics fear that eventually it will be difficult to be Catholic in the United States.  I hope that never comes to pass, but historically it would not be unheard of.  I am glad that, in this fallen world, there might be another nation out there not easily swayed by the government I might be fleeing, where I might find safety if it were so needed.

Christopher West once said that fig leaves are necessary in a fallen world.  National borders might be good for the same reason.  Until we are all united in Christ in heaven, it is good to have a haven to run to if those who govern your home should go askew.
Posted by Fr. V at 9:04:00 AM

Email ThisBlogThis!Share to TwitterShare to FacebookShare to Pinterest
Labels: Sin, Talk of the Nation

Well said, Father. I have never heard that aspect of the border conversation, and it makes sense.

It is something to consider, along with charitable and sensible immigration policies for those who are fleeing poverty, persecution, or who wish to raise their families in a safer environment.

My Polish grandparents (born in the 1880s) emigrated here in the very early 1900s. Poland had been taken over by Russia and from a political standpoint, ceased to exist. Poland had no borders because Poland had been eradicated. Their language and culture were being destroyed.

My Mother's birth certificate (1915) lists the "birthplace" of her parents as "Russia Polish." They were ethnic Poles but their country was now "Russia."

I'm sorry to say that my grandparents held strong animosity toward Russia and anyone or anything "Russian" and passed those sentiments on to their children because of what they and their families had suffered.