TUESDAY QUOTE OF THE WEEK CCLXXXIX

FINDING TRUTH WHEREVER IT MAY BE FOUND:  "The aim of preaching is to tell man who he is and what he must do to be himself.  Its intention is to disclose to him the truth about himself, that is, what he can base his life on and what he can die for."  Cardinal Ratzinger

QUOTE II:  (In reference to homilies)  "If the pilot doesn't know how to land the plane, he's not the only one on board who is nervous."  Fr. peter John Cameron O.P.
IN OTHER NEWS:
Very late blog today.  Spent most of the day in bed with the flu.  BLAH.  Thank you God that it struck AFTER the Easter brouhaha. 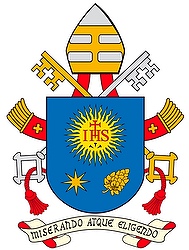 If you haven't heard, the pope's coat of arms have gone through some adjustments.  The flower no longer looks like an upside down bunch of grapes and the star now has 8 points which is more in keeping with the heraldic symbol for Mary.  Read more here.
Friends traveling in Rome got a shot of the new pope: 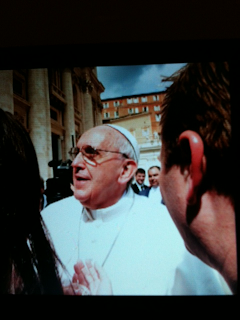 Mary wrote to say, "When some fellow homeschoolers were talking in our Yahoo group about Christian symbolism, your name came up, and I decided to complete my sketchy outline of topics you have covered on symbolism on Adam's Ale. I've been keeping a running list of your links to your posts on windows, the organ, architecture, etc., so I went ahead and added more posts on symbolism and a few other things."
Wow, that's a lot of work!  Thanks for doing it.  Here are the links for those who might be interested:
Study of the Sacred Arts with a focus on Adam's Ale posts.  Go here.
Adam's Ale posts on symbolism and beauty.  Go here
And here is today's video sent in by Frank for those who need a little laugh.  (Under a minute.)  Go here.
Posted by Fr. V at 12:47:00 PM

Hope you are feeling better!! This flu is "ugly"!! Had it the beginning of March and missed several days of school.

Glad to see you posted my web lists! :)

(Yeah, I know I could be diagnosed with Excessive Detail Disorder!)

I've actually found the lists handy even for my own use. It makes it a lot easier for me to find your old stories on symbolism. I just quickly looked up your articles on candles after noticing Fr. P chanting about bees twice in the Exultet. Never noticed those bees before.

Might you be blessed with a speedy recovery facilitated by some sorely needed rest.

Snickers and I hope you are feeling better soon. Let me know if you need some homemade chicken noodle soup.