FRIDAY POTPOURRI: HE WHO SINGS WELL

The detail that went into the documents is astounding.  A slow as the Church is to act at times it is amazing how much they were actually able to accomplish.  It is said that a giraffe is a horse put together by committee.  It is a credit to the Holy Spirit that such large and numerous committees were able to pull off Vatican II. 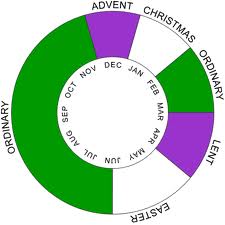 The next chapter of Sacrosanctum Concilium concerns the liturgical year.  After reaffirming Sunday as the Lord’s Day and lauding the holy seasons, mysteries of Christ, and feast days of saints, it makes recommendations to revise the Church calendar, “to suit the conditions of modern times.”  (107)

Far more interesting is the section on Sacred Music.  The same provisions for language is given that were previously given for the Mass.  That is, there is place for the vernacular but there should be some talent to sing in Latin by the congregation, particularly the Mass parts.  Sacred Music is to be preserved and “Choirs must be assiduously developed, especially in cathedral churches.” “The Church recognizes Gregorian Chant as being specially suited to the Roman liturgy.  Therefore, other things being equal, it should be given pride of place in liturgical services.” (116)  “Bishops and other pastors of souls must take great care to ensure that whenever the sacred action is to be accompanied by chant, the whole body of the faithful may be able to contribute that active participation which is rightly theirs . . .” (114)  This is something we try to do at least in small measure during Lent at St. Sebastian.  All that being said, it does allow and even encourage other suitable, sacred music, especially polyphony, into the Church “so long as they accord with the spirit of the liturgical action as laid down in Article 30.”  (116)

“The pipe organ is to be held in high esteem in the Latin Church, for it is the traditional musical instrument, the sound of which can add a wonderful splendor to the Church’s ceremonies and powerfully lifts up men’s mind to God and higher things.”  (120)  Other instruments are allowed to be used if they are approved by the bishops and, “only under the condition that the instruments are suitable, or can be made suitable for sacred use; that they accord with the dignity of the temple and that they truly contribute to the edification of the faithful.”  (120)

Composers are then encouraged to keep composing for both large and small choirs and that the words of the music must always be kept in strict line with Catholic doctrine.  It is on this last point, particularly with Eucharistic hymns, that I would like to rip out much of what passes as Catholic Sacred Music in contemporary “Catholic” hymnals.  (Personal note.)
Posted by Fr. V at 7:41:00 AM

Amen to your personal note. Let's sing with timeless reverence in awe of the sacred mystery of an encounter with an ineffable God instead of celebrating how great we are or getting it backwards by singing His words to us.

Just going over my sacred art syllabus and found this perfect example of a current composer's efforts to implement Sacrosanctum Concilium: The Logos of Sacred Music, by Paul Jernberg. You can actually listen to his compositions being sung at the bottom of the page. They are timelessly beautiful! I didn't know anyone wrote like that anymore. (Strikes me as doing with music what to Erik Armusik does with paint: new, but timeless, drawing inspiration form the masters. ) Hope some parishes across the country pick up on this composer's music.

Sorry to inundate you with posts on this topic, but the timing is perfect, as I am working on this part of my syllabus . The Institute of Catholic Culture just posted their long-awaited lecture, Beauty: Sacred Music and the Catholic Tradition. They include a great outline which lists a number of high quality resources, including a section on "How do I introduce beautiful sacred music to my parish?"