HOW TO ELECT A POPE

I received a phone call yesterday from a local psator who is also a classmate.  “Are you going to get gold and yellow bunting for the new pope to put on the outside of your church?”  I’d completely forgotten about this tradition.  When John Paul II was elected pope I was in junior high school.  I remember I was at St. Ambrose when he died and we were instructed, in those parishes that were willing and able, to hang black bunting up.  It was a windy day and I got a ladder out to hang some from our roof.  A mighty gust blew the ladder down and I was suck up there until a friendly jogger happened by.

Anyway, I remember that I purchased a little pamphlet entitled “When a Pope Dies” by Christopher Bellitto Ph.D. those many years ago.  And by small I mean tiny.  I’d carried it from assignment to assignment (just in case) and always threw it somewhere behind books on the bookshelf.  Well, last night I remembered that I even had the book and started pulling shelves of books out looking for it and . . . IT WAS FOUND.  I can’t believe it!  Such things are usually lost until one week after they were needed. 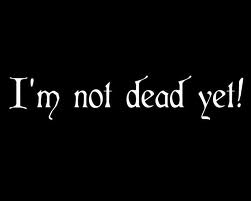 When looking at the election of a new pope it is interesting that books tend to assume that the previous pope had expired, not simply given up the papacy for lent.  There are elaborate descriptions on how the cardinals oversee the destruction of his ring and seal and how he is to be buried with them along with them along with copies of his most important works.  (I imaging it was crowded in there with John Paul.)
So we are moving in to a new election without celebrating a funeral.  At the end of the month there will a period of interregnum between Benedict’s retirement and the newly elected pope.  Our current method of electing pope is relatively new – only about 1,000 years old.  It came about with the election of Gregory X.  There was such rivalry and fighting about who should be the next pope that the Church went almost three years without one.  Finally the town, tired of the whole thing (and probably tired of feeding and housing these guys) locked the cardinals in a building, ripped off the roof exposing them to the elements, and threatened to feed them only bread and water.  Quickly Gregory X was elected. 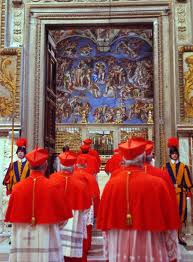 Since then it has been pretty much the same.  Every day the cardinals are will be driven from their simple accommodations to the Sistine Chapel and locked in with no access to news from the outside world.  They will meet twice a day and each session is can have two votes.  A man must have two thirds of the votes to be elected.  (Interestingly, if the number is such that they cannot be divided into three equal groups, the man must receive two thirds plus one.)

At the end of each vote a tally is made and a needle is inserted through the ballot so that it may not be counted again.  If no man is elected, the ballots are burned and black smoke tells the waiting crowd that there is still no pope.  If a two thirds majority is given to one man, he is approached and asked, “Do you accept your canonical election as Supreme Pontiff?”  If he says yes he is asked by what name he wishes to be known.  When he answers, he is then pope.  The ballots are not burned but sealed and put in the Vatican archives and chemicals are added to the fire to let people in the outside world know that it has a pope once again.
The man is taken to the sacristy and dresses.  He first receives the cardinals and then is taken to the balcony in St. Peter Basilica and the crowd hears, “Annuntio vobis gaudium magnum.  Habemus papam!”  “I announce to you with great joy.  We have a pope!”  Then parishes throughout the world hang up their gold and white bunting. 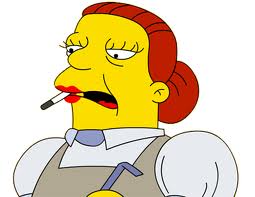 Interestingly enough, the minimum requirement for becoming pope is that you be a Catholic, baptized male.  We have more requirements than that for becoming the milk lady in the parish school cafeteria.
There is much more to the story.  If you found this the least bit interesting I assure you there is much more to know and plenty of places to find it.
Posted by Fr. V at 6:45:00 AM

but doesn't that baptized male also need to then become a priest, then bishop, then Cardinal? Therefore, a married man can still not become Pope. Correct?

That first part of your question can be made up for quickly, you are correct about the second part, he cannot be married.

HI Fr. V-I am looking for information regarding the tradition of bunting around the church doors. Do you have any specific resources? Thanks!