WAKING FROM A DREAM

This post is risky.
I’m going to tell you about a book I am ready BEFORE I finish it. I did this once before (not on this blog) and it was a disaster. The end of the book took a horrible turn and I was mightily embarrassed after telling others about dit. 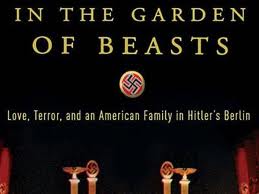 Just the same – This book is called, “In the Garden of Beasts” by Erik Larson. It concerns the state of world perception, particularly of that of the United States, during the rise of Hitler. Everything on the surface seemed so normal and people wanted to believe in a world run by sane people, the United States desired to stay out of another European wasp’s nest, not to mention we wanted to be on good terms with Germany because they owed us an incredible amount of money. Bearing that in mind I find this paragraph chilling: 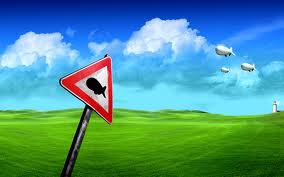 “Nice days were still nice. ‘The sun shines,’ wrote Christopher Isherwood in his Berlin Stories, ‘and Hitler is the master of this city. The sun shines, and dozens of my friends . . . are in prison, possibly dead.’ The prevailing normalcy was seductive. ‘I catch sight of my face in the mirror of a shop, and am shocked to see that I am smiling,’ Isherwood wrote. ‘You can’t help smiling, in such beautiful weather.’ The trams moved as usual, as did the pedestrians passing on the street; everything around him had ‘an air of curious familiarity, of striking resemblance to something one remembers as normal and pleasant in the past – like a very good photograph.’”

I wonder if we will wake from a similar dream. Life for citizens of the United States is good. Never have so many people lived so well. We have so much and can do so much. Never have so many people lived with such freedom and power. Life is enjoyable. We run in the park, grab a cup of coffee at the local coffee shop, speak our mind without fear, worship on Sunday as we will. True, we are at war but day to day life as most of us experience it is frightfully normal if not good.

Will we wake one day to fully realize that behind cheery billboards, smart buildings, immaculate lobbies, we have done away with thousands of human beings in the womb? One day, will we look back and wonder how it could have happened in such drastic numbers? Will others ask why we as individuals didn’t say something? Will we be embarrassed as we are about the treatment of Jews, or slaves, or Native Americans, or the whole list of people it was at one time or another Okay to treat as sub-human?

Email ThisBlogThis!Share to TwitterShare to FacebookShare to Pinterest
Labels: culture of death, culture of life, Death, Defence of Life

Father, excellent post. I hope it's not the "new normal." The issue has never gone away. Roe v. Wade "settled" nothing.

Here in the US, the Lord is changing hearts, especially among young people.

The US now has far more pregnancy help centers than abortion facilities.

Although the pro-life cause has almost halted at the federal level, many, many states are passing excellent pro-life legislation, thanks to the election results of last November. Here in Ohio, we at least get the chance to have such bills considered.

The pro-life message is slowly, slowly making inroads in Europe.

Russia's population is imploding, due to their extremely high abortion rate. But national leaders are now trying to get women to bear children. Hmmm.

Even in Communist China, some women are risking everything to bear an "illegal" child.

We still have so much to do. Only with the Lord's help will we turn this situation around.