FRIDAY POTPOURRI: I SPY WITH MY LITTLE EYE

With the changes in the Mass coming and most of those changes taking place in the parts that the priest prays, you may find us with our nose stuck in the book. There are very few references as to where a priest should be looking. I suppose that for the most part they are assuming that we are reading the Sacramentary (soon to be known as the Missal) and so direction is not needed. One of the few exceptions is in the Roman Canon where it says the priest looks up during the words, “. . . and looking up to heaven, to You, His Almighty Father . . .” 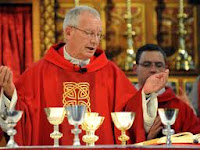 But many priests make it a point to look at places to mean things. During the consecration some make it a point to stare out at the gathered persons as though they are the ones being addressed. They are not. How many people realize that it is the Father being addressed on behalf of the community? Not that there is anything absolutely wrong about it, but at best I think it confusing that some clergy make it a point to make eye contact with every person in the congregations when they say, “He took bread, gave it to His disciples and said, ‘Take this all of you and eat it . . .’” Those in the congregation are not the ones being directly addressed. I think in the extraordinary form of the Mass many may miss what is literally being said but they know it is the Father being addressed. In the ordinary form we may understand what it is literally being said, but may miss Who is being addressed and why.

I try to make it a point to either look at the book or “up” when the Father is being addressed. In this way we indicate that we are saying to the Father that Jesus told us to do perform the Mass, that is where we get our authority to do it, we are doing it to be reunited with You and to give You thanks and praise, and in turn ask for your grace though Jesus in the power of the Holy Spirit. This is our side of the phone conversation with God – only tacitly directed to us.

There is on most all occasions one prayer in the Canon directed to Jesus. “Lord Jesus, You said to Your apostles I leave you peace My peace I give you. Look not on our sins but on the faith of Your Church . . .” In order to get this across, though there is no explicit direction, I look at the Eucharistic species, Jesus now present on our altar, to get the point across that it is He that is being addressed. 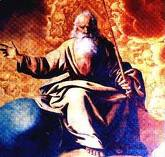 Then finally we are addressed and it is appropriate at that time to look out at the people. “The Lord be with you” and so forth.

So in the end this comes largely down to opinion – and IMHO it would be wise for priests and public prayers to practice the symbolism of “looking” at the one being addressed with one’s eyes. It makes for a clearer understanding even when the Mass in the vernacular.
Posted by Fr. V at 9:00:00 AM

I agree w/ you, Father, 100%. What you described is exactly what I do during the prayers. Glad to know that someone else is doing it that way, too.

I notice that you quickly "look" at all the chalices on the altar when you say, "This is the cup of My blood . . . ."

I don't see many priests doing so. I assume that you are looking at all of them in a conscious effort to indicate that the celebrant "intends" to consecrate all of the wine present on the altar, not just the chalice in his hands.

I've often wondered why you are so intent on "the look" but other priests are not.

Ad orientem would solve everything. The priest could "turn and face the people" when he was instructed to do so and there would be no question in anyone's mind about who (or Who) was being addressed.

Thanks Father for the clarification. I will be so much more aware of the intent in the future.

dear father v.--in reference to traditional catholics who pray the mass in the extraordinary form---i am fairly certain they know what is being said and to whom its being addressed--of course there are guide books for newcomers, but people who attend this
mass regularly have a missal in hand--even children are instructed in the use of the missal--sincerely, anon

Everything you are saying/doing would be so much more easily accomplished if you were celebrating Mass ad orientem. We would join you and your prayer offered to Him --- there would be no choice of where to look.