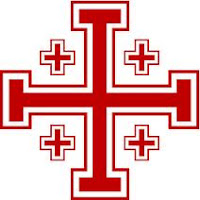 . From last week you will notice that it is constructed using Greek Crosses. It was given to the Crusader’s by Pope Urban II as they began their campaign to reestablish a Christian presence in the Holy Land. As the Jerusalem Cross it came to represent the Latin Kingdom that was established there.

There is no absolute agreement on what all of the Crosses mean. Most of the time the center, large cross represents Jesus. The four small crosses can represent the four Gospels, or the four directions that the Word of Christ was to spread out into the world from Latin Jerus 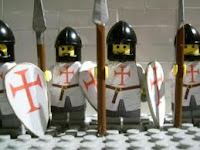 At other times this cross is used by travelers on pilgrimages. The center cross represents the pilgrim while the smaller crosses represent those praying for the pilgrim.
Posted by Fr. V at 7:46:00 AM

I'll tell you something amusing, they're actually making those in Bethlehem.. (yes Palestine). They make Wooden Crosses where Jesus is from to support CHRISTIAN families in the lands that were subject to many crusades.. Quite funny