Somebody sent me an Email concerning their child’s idea of what a priest is. It absolutely made me day. In part it read, “So I ask, ‘what 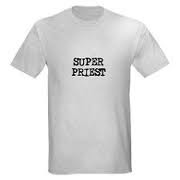 does it mean to be a priest?’ and she says, ‘they are in charge of the whole church, they protect all the people’. Which I think is a fantastic answer from my 5 year old and then she follows it up with ‘in case the whole building falls down on us or something.’”

Is that sweet or what?

Along those lines I was able to out and meet a new pastor in the diocese. He has been at it for about half a year and, as readers of Adam’s Ale know, I have been either administrator or pastor of Saint Sebastian for about two years now. He was just finishing up a wedding and I had a cancelled appointment so we agreed to meet at a half way point between our parishes to talk.

I remember when we used to get together and talk about how to save world. Burning with all of the theological

and philosophical learning we had endured in the seminary we could not wait to bring Christ into people’s lives and aid them in becoming saints! We are loyal sons of the Church, confident that in bringing the Eucharist, the sacraments, and remaining obedient to the Church souls could easily be won for the Kingdom.

“Somebody crashed into the church building,” my friend told me. (This is not a photo of his parish building) “Do you have any idea how expensive that is going to be?” We talked about roofs and parking lots and operating deficits and how we are going to get by during this time when there is a moratorium on capitol campaigns in the diocese. Two hours we talked about such things. It is funny how both serious and utterly unimportant the conversation was. On the one hand, we have to talk about such things. We have to keep people safe by making sure that “the whole building doesn’t fall down on them or something.” On the other hand, in a thousand years our buildings might very well be dust, but where a soul ends up will be played out in eternity.

So we cut ourselves a break and allow the conversation to flow – salaries, tuition, parish policies, hiring and firing, the best kind of floors to have in a school, how to get people to turn off lights and close doors when the air conditioning is on and so forth and so on.

But a pastor cannot live on such a diet. So I have some meetings in which such topics are absolutely forbidden.

Such as last night.

It was the 4th or 5th meeting of the Saint Sebastian Chesterton Society. We usually have it out in the loggia but it was just too hot and muggy. So we held it in the rectory. It is a small by mighty group who devote themselves to reading and discussion of the “Good things men need to hear,” to quite Scripture. Granted, the title of the essay this week was “On Lying in Bed,” (picked out by our parochial vicar) but it was fruitful none-the-less. And I realize that we were able to enjoy this meeting in the cool of the rectory because the pastors that came before me had meetings like the one above to ensure that a rectory was built, air conditioned, re-roofed, painted, furnished . . .
Posted by Fr. V at 7:41:00 AM

"Burning with all of the theological and philosophical learning we had endured in the seminary, we could not wait to bring Christ into people’s lives and aid them in becoming saints!"

It's very encouraging to know that the seminary produces priests who have this desire.

And no bad tile jobs in sight last night.

Just wondered if anyone can come to your Chesterton meetings? One of his advices on names for children is to have one name with one syllable, one with two, and the third with three. And his name fits that pattern. (order makes no difference)

This posting was a nicely balanced one. We do live in this world and must consider worldly things even as we prepare for the next.....